Considered one of the oldest formed Military Formations of America, The Governor's Guard of The State of Connecticut traces it's linage to 1771, when a State Militia was formed to protect the Colonial Governor. Numbering 100 Men, these were a Mounted Force. With the start of hostilities with Great Britain over American Independence, two other Mounted Units were established. They were based in both The state Capital of Hartford and The City of New Haven. The Guards patterned their uniform appearance after The British Coldstream Guard, to include their trademark ''Bearskin'' Helmet and Scarlet Coats. With the inclusion of The Guard into The Continental Army, The Guards were re-named as Connecticut Light Horse and traded their Red Coats for Patriot Blue.

The Guards remained after The War as was their original creation – a protective Force for The State Administrator, although they became more of a ceremonial Unit, used in parades, etc. By the start of The American Civil War of 1861, they were reformed into The 6th Connecticut Volunteer Infantry, and fought in 26 major battles with The Army of The Potomac. While most State Militias were reformed into National Guard Units (after WWI), the original context of The Guard remained as one of promoting State History. Even today, The Guard are used in State functions to recall their use during The Revolution. The Guards train monthly in drill and ceremony similar to those formations in the 18th Century (Musket, Saber, etc.) 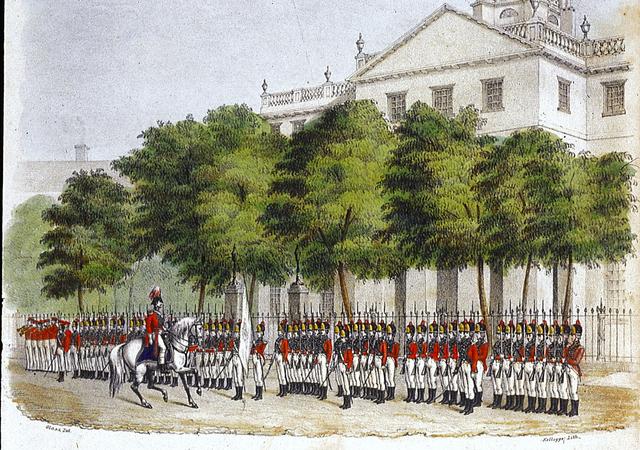