The German Panzerjager (translated to "Tank Hunter"), was a Class of Armor vehicle designed to counter Allied Tank Destroyers (aka "The Wolverine" Model). Designed along similar lines, The Panzerjager was first produced in 1939. Weighing 6 tons, they were roughly 15 feet long and 7 feet high. They featured a 3 man crew. Like their Allied adversaries, The Panzerjager featured two variants, both opened and closed Turret. The Main Gun was a 4.7cm Cannon with a 1,000 yard, armor piercing effective range (capable of penetrating up to 4-inches of armor plate, non-deflected). A 6 cylinder, The Panzerjager was capable of battlefield speeds of up to 25 mph. First actual deployment was during the Occupation of France. They were effective in Germany's North Africa Campaigns. They were considered very accurate weapons. Unfortunately, only 200 were known to be produced by the time of their production stoppage in 1943 (due to Hitler's desire to develop The King Panzer). 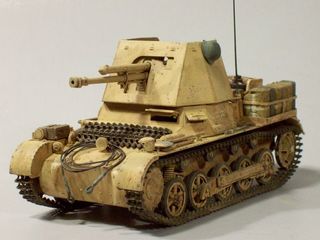