The German World War I “Supergun” known as “Dicke Bertha” (or Fat Bertha), was originally developed in the late 19th Century. By the star of World War I, some 12 “Bertha” Guns were in inventory with The Imperial German Army. Unfortunately (for some unknown reason) – only 2 were ever operational in the field. “Big Bertha” weight close to 95,000 pounds. It was twin wheel designed, requiring either railway or armored vehicles to tow into position. Overall length was slightly over 20 feet long. An “average” shell from “Big Bertha” was a high-explosive 1,807 pound charge – capable of a range of 8-miles. The shell averaged 1,300 feet per second. “Bertha” was used to destroy at least 6 known Belgium Fortifications during the War. A common problem with the “Bertha's” was the constant firing of the barrels (which commonly burst) due to the non-stop firing of the large charges. Several examples of “Bertha” on display are actually replica models. 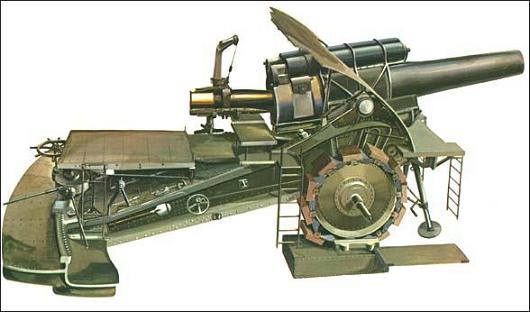