German General Officers, as with most Armies throughout The World, have Personal Colors or Flags, which are used to identify them in The Field. Such Flags were also used on Planes and Vehicles. In The German army of World War II, The General Officer's Flag was a Swallowtail Pattern. The Field was Red. Centered was a White Circle with Black Swastika (identifying The Socialist National Party). On The Hoist of The Flag was feature a Black Maltese Cross (long a symbol of German Militarism). In the Lower Left Hoist Quadrant, was placed The German Eagle and Swastika image (also in Black). While Field Flags existed, most General Colors were designed for Staff Car usage. Both Cloth (Nylon) and Metal placards were used between 1942 and 1945. 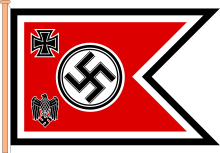