This German fighter was one of the first “”Fokker” Models designed in 1916. It was also the model used by famed Ariel Ace Manfred Von Richthofen (aka The Red Baron). Built in response to Britian's prototype Sopwith Camel, The Dr. I was considered a “Tri-plane”. With most fighters using a Multi-wing (Bi-wing) design, the inner (or split) 3rd wing in The Dr. I was supposed to add more stability and turn ratios in combat. With increased speed (185 miles per hour), The Dr. I was lethal. She was 18 feet long with a primary (main) wingspan of 23 feet long. Her operational ceiling was 20,000 feet. The Dr. I was armed with twin Spandau 7.92mm Machine Guns. She was also the last of the Tri-wing developed fighters. 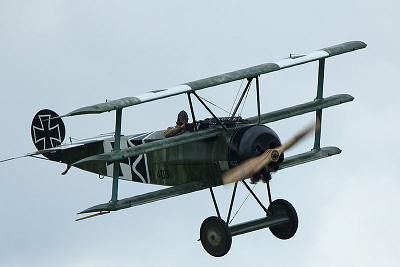