An inter-War Period Aircraft, The German Bucker Bu131 was a Bi-wing Trainer used by The Luftwaffe in 1935. Nicknamed The ''Jungmann'' (''Young Man'') – the Model was used due to the secretive nature of Air Force Training in Germany (due to The Versailles Treaty of World War I). As such The Bucker was seen as a ''Civilian Air Trainer''. Over 5,000 Bu131 Aircraft were produced. When German witched to more advanced flight trainers, most of The Bu121 were transferred to Spain (National Air Force) and The Kingdom of Italy (where both were converted over to Ground Support Bombers). Many examples have survived as both flying Museum pieces and are still used in some parts of The World as Trainers.

Supporting a Crew id (20< The Bucker was 22-feet in length with a Bi-wingspan of 25-feet. They were powered by a Single Hirth 504, 4-cylinder In-Line Engine, capable of producing 100-HP. They could achieve an airspeed of 115-mph with an operational ceiling of 14,000-feet. The could range 400-miles. 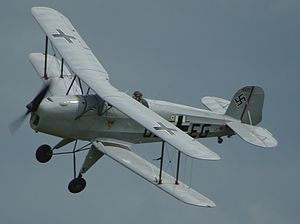