Flag of The Republic of South Vietnam

Originally conceived as an Imperial Banner in 1890, The Flag of The Republic of South Vietnam was used collectively by The Countries Northern and Southern Regions during The French Occupation from 1948 until their defeat in 1955. It was again adopted by the declared Republic after their National Elections in 1960. Described as a Yellow Field in it’s entirety, a series of  (3)Red Thin Stripes run horizontally from Hoist to Fly. These represent the unifying “blood” shared by the two Regions (North and South). Flown until The Fall of Saigon and their Government to North Vietnamese Forces in 1975, The Flag is still seen in use occasionally by Patriot South Vietnamese in America, who consider themselves to be a Government “in exile”. 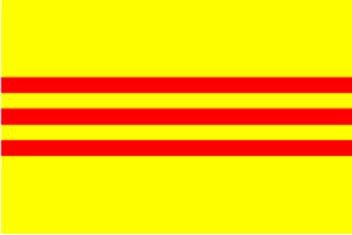