Flag of The People's Army of North Vietnam

The PAVN Flag  (Peoples Army of North Vietnam), traces it’s roots to The French-Indochina War of the 1950s. First seen at The Battle of Dien Bien Phu fought in 1954, the Battle was an epic failure for the superior French Army. With the end of that War, Socialist Forces were assured of fair National Elections (which they claimed were manipulated). This Flag was used as a rallying point for Communist Forces (other than the political sub-division of The Viet Cong), was The “Red Banner”. Based on traditional Communist Flags of The Era, it was a Red Field in it’s entirety. Centered, a Yellow 5-pointed Star was placed. In the Upper Left Canton, was the phrase “Quyet Thang” (“Determined To Win”). Rarely seen (unlike The Viet Cong Flag) in combat, it saw more use as a Headquarters Flag and Propaganda tool than an actual battlefield. After The War in 1975, the phrasing was removed, but the initial Flag has remained unchanged. 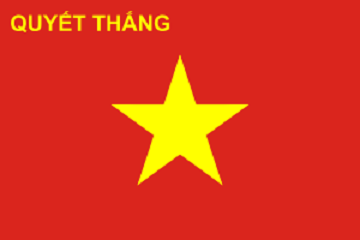