Dragoons were a form of Mounted Infantry. Their exact origins are unclear, but the Title is seen around the 16th Century  in Parma, Italy. Prince Alexander of Parma created a Unit of Mounted Infantry  (Mules), which he called "Dragoons". In the 17th and 18th Centuries, French Light Cavalry, who carried Firearms exclusively, were called "Dragoons". Regardless of which theory, the practice of riding into combat, and then dismounting to fight, actually goes back as a common practice in Ancient Rome. Dragoons were seen as highly mobile Infantry.

Although Dragoons became more reliant on Rifle and Pistol, they still carried Sword and Saber. This is what gave Dragoons their dual role as being able to fight as both Military Branches. Most Dragoon Units were often indistinguishable from Cavalry in general appearance. In America, by way of example - adopted Orange facings as their identifying color.

In America during The Revolutionary War, both both Patriot and British Forces used Dragoons. In Colonial America, Dragoons were a matter of great need against the stronger British Army. England adopted Dragoons, based on how effective American Dragoons were becoming. During The American Indian Wars of the 1850, with a very small standing Army, American Dragoons were crucial to Frontier patrol and defense. However, they would soon be considered redundant, and merged into traditional Cavalry  (1860s). Dragoons saw their greatest use during The Napoleonic Wars. Most European Armies maintained these type of Forces. However, they were mostly absorbed into Cavalry by the late 19th Century into the 20th Century. 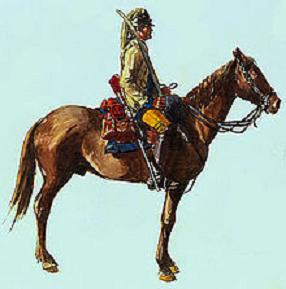