A Croatian stronghold, Dobra Kuca was first mentioned in 1335, when Charles I (Hungary) - "traded" estates for Kuca. It was an impressive structure. Located near Daruvar, Croatia - it was built possibly in the 11th Century, as a defensive structure. Positioned on a long flat plateau, it utilized the Ridge Classification of castle building techniques (using an extension of a hill or mountain as a primary feature of defense). Designed to follow the natural lines of the plateau top, it had an odd shape. A high defensive wall was constructed along it's perimeter (with supportive buttresses incorporated into the walls for support). Kuca may have had as many as 3 defensive Towers (of varying sizes). A moderate sized Donjon style interior structure was central to the castle. Kuca appeared to also have a Bregfried Style Tower for additional defense of the Donjon.

Various other interior structure were also incorporated into it's interior Bailey. Another factor to Kuca'a defense was that it "invisible" to sight (due to it's position on the plateau) - and could only be readily seen when standing underneath it (looking up from the Plateau valley). This was a very effective innovation. A Market Town developed and thrive near Kuca (this places the castles to 1510). With The Ottoman Turk Invasions of 1542, Kuca was captured and garrisoned. It fell into disrepair. When The Turks left the region, much of Kuca was slighted. Centuries of lack of repair and Nature - has completely remove all traces of Kuca (save a few foundation stones). 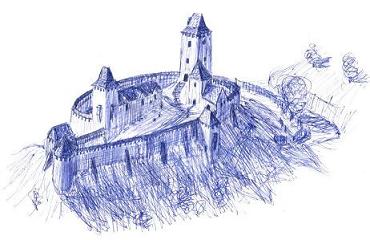