The 15th Alabama Infantry Regiment consisted of (11) formed Infantry Volunteer Companies, who fought for The Confederate Army in The American Civil War. The Regiment was assigned to General Robert E. Lee's Army of Northern Virginia. It was recruited in 1861. It numbers swelled to over 1,900 Officers and Men. By the end of The War, only 170 survived.

The 15th Alabama is best remembered for being the primary attackers of The Union Army's far left battle lines at The Battle of Gettysburg (1863). The Regiment was tasked with turning this point from a group of under strength Federal defenders from The 20th Maine Infantry. Holding their position on Little Round Top (a semi-mountainous granite outcropping, swelled by dense trees and brush), The 15th Alabama tried no less than (15) frontal assaults against The 20th Maine. After (14) such, The Maine Troops were exhausted of ammunition and determined to hold their line. Fixing bayonets, The 20th charged down Round Top straight into The 15th Alabama (who by now were equally exhausted. Several hundred of The 15th Aabama were taken prisoner, while other escaped.

The 15th Alabama would be reassigned to The Western Theater briefly, fighting in several major engagements there. Back with The Army of Northern Virginia during the last year of The War, they too would surrender at Appomattox Court House in 1865. The Regiment participated in over (40) major Battles during their service. 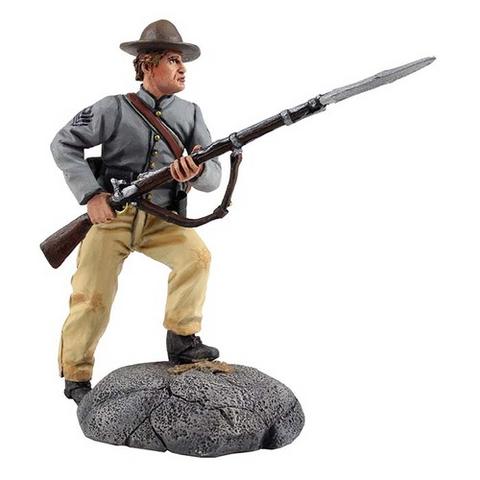