Another form of Neolithic and early Middle Ages defensive structure, The Circular Rampart was usually but on a hilltop (making it an early Hill Fort construction). A large built up earthen berm (reinforced with wood and stone within the dirt – was formed in a circular shape. Access was controlled via a wooden gate. Early designs suggest that Circular Ramparts may have featured small Wet Moat systems surrounding them as well. Predating Rome, these early “Ringforts” may have been the first attempt at creating a defensive structure. The style was seen mostly in Northern Europe (with some more primitive versions in The Americas as well). Generally only visible by air (due to centuries of wear leaving only a slight “footprint” of their raised foundations – some examples still can be located. 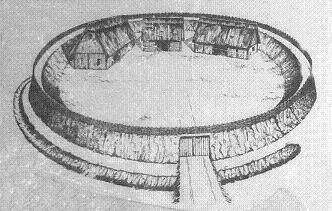