Developed in 1915, The Sopwith Strutter was Britain's “first” 2-seater fighter/multi-purpose aircraft used in World War I. Called “1 ½ Strutter” due to the twin support struts used to secure the top and bottom bi-wings. Over 4,500 were sold to France for war service. Of the remaining 1,500 odd planes – they saw service both overseas and in England. The craft's length was 25 feet long with a wingspan of 33 feet. Loaded weight was over 2,190 pounds. The Sopwith Strutter was operated by a Clerget Rotary Engine capable of 130 horsepower. This craft could achieve 100 miles per hour and had an operational “ceiling” (or maximum height) of 15,000 feet. Armament included a front mounted (timed) 7.7mm Vickers Machine Gun and an identical gun setup at the rear (or Observer Seat). The Strutter could also carry up to 130 pounds of “contact” bombs. 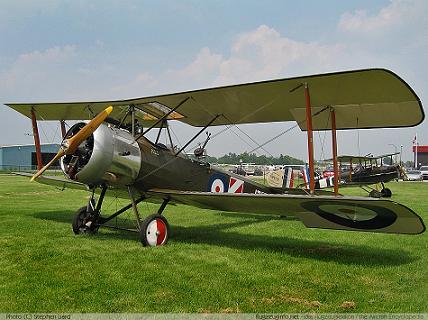