Formed as a Bodyguard to King Charles I (England), in 1642 – The Scots Guard was “officially” made part of The Royal Army in 1686. They were originally intended for service again The Irish Rebellion. In 1809, The Scots Guard served against France during the early French Republic Wars (serving with distinction during The Peninsular War). Spending time fighting in and around Spain, The Scots Guards were present at Waterloo. They held the Right Flank of The Hougoumont Farmhouse Defense. They served with great honor in both World Wars as well.

Sent back into Northern Ireland in the 1970s due to “The Troubles”, The Scots survived (again) their engagement – only to be the first British Unit sent into The Falkland Island Conflict in the early 1980s. They are credited with conducting the “last” bayonet charge used in The British Army, when they “charged” a fortified Argentinian Position! They too have also been deployed into the recent Middle Eastern Conflicts. The Scots Guards are also World renown for their Massed Pipe and Drum Band. This organization have performed throughout The World as good will Ambassadors.

They are also given the honor as being the first Foreign Band allowed to play inside The US Defense Department's “Pentagon” Command Building. They too wear The Scarlet and Black. Their Button “spacing” is set in a grouping of “3s”. Their insignia is a Silver Saltire (representing the Flag of Scotland, over a Silver “Sunburst”. The Crest is a Thistle (Plant). They have no Plum (Feather). Ranked third in “Line”, their Motto is “No One Touches Me With Impunity.” 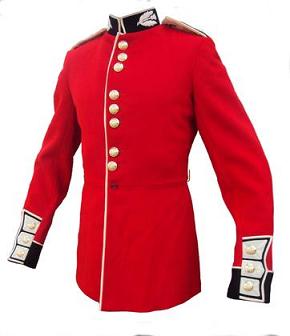