The British 25-Pound Howitzer was first fielded in 1942, as a crew served "Tank Killer". It was primarily deployed against Japanese Forces in The Pacific War Theater.  Using a 87mm Cannon it was capable of hurling a 25-Pound shell to a maximum range of 12,600 yards. Shells were either High Explosive, Smoke, Shrapnel or Armor Piercing. The average rate of fire was rated at 4-rounds per minute for a 6-man Gun crew. The 25 weighed 4,000 pounds and was moved via twin pneumatic rubber tires. The gun could be attached to various Armor or Heavy Trucks (2.5 tons), for transport. It features a full 360 degrees turn radius, with a maximum elevation of 40 degrees. Protection of the crew was limited to a 3-inch metal front plate (sometimes referred to as a Gun Plate) - which ran from the cannon barrel rearward. 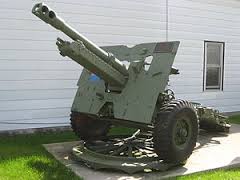