The Airco Manufacturing Co. developed The de Havilland Medium Bomber in 1916. Considered the first full daytime Bomber mass produced, it was 30-feet long with a 45-foot bi-wingspan. Having an operational ceiling of 16,000 feet, The de Havilland was capable of speeds up to 140 mph. Twin Bomb Racks mounted underneath the Norton wing, gave electrical firing ability to the Bombardier. The Bomber was capable of carrying 450-pounds of explosive. As a primary ''first defense'' plane , the Pilot controlled twin Maxim Guns (.30 cal). The Bombardier accessed twin Lewis Guns.A common problem with The de Havilland was the placement of it's fuel tanks. Directly underneath the Pilot and Bombardier, one well placed shot was instant death. Also, due to wing placement, viability was severely limited. Originally the standard issue to The US Army Air Corps, production to them was stopped until proper modifications could be made. Within the year, with modifications made, nearly 5,000 so-called "Liberty Planes" would be produced and used. 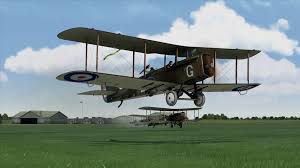