de Havilland's DH110 ''Sea Vixen'' was a Royal Naval Fleet Defense Fighter, first deployed in 1959. The ''Vixen'' is remembered for being the first British Fighter Jet to achieve supersonic airspeeds. It was also one of the first of it's type to see combat (Aden Emergency of 1972). 145 Production Models were in service.

Although also marketed to The Royal Air Force as well (1952), only The Royal Navy picked up the Contract. A number of Aircraft Carrier were deployed with The DH110. However, 55 ''Vixens'' were lost during accidents at Sea (with none being citing as mechanical situations).

Armament varied depending on Mission needs. Standard were either packages for (6) Missile or Rocket combinations (Surface to Air or Air to Air). In addition to 2,000-pounds of conventional munitions, The ''Sea Vixen'' could deploy the 2,000-pound ''Red Beard'' Tactical Nuclear Device (15 to 25-Kiloton yield, depending on Model). The Fighter would be replaced (retired) in 1972, in favor of The US ''Phantom'' F-4 Fighter. Most survivors were re-purposed as Target Drones. A very small number are in Flying Museums today. 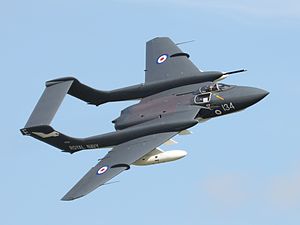