The British Associated Equipment Company (AEC) developed their Armored Vehicle for use by The British Army in World War II. There were (4) versions developed. Over 600 were manufactured and delivered for Combat duty between 1942 and 1943. The AEC was considered a workhorse of The British Army for many years even after being replaced in 1954 by The ''Saladin''.

Weighing 14-tons, The AEC was 17-feet long with a width of 8-feet. Model varied for a Crew of between 3 to 4 Soldiers. The AEC featured 2-inches of armored plating throughout. Operating on twin axles (independent 4x4 abilities), it was powered by a Diesel Engine capable of 150-mph.

Typically The ACE Armored Vehicle supported a single 2 or 6-pounder Gun, with later upgrades to the 75mm Main Gun. Secondary armament included the popular Bren Machine Gun. The AEC saw most of it's Combat Service in The North Africa Campaigns. 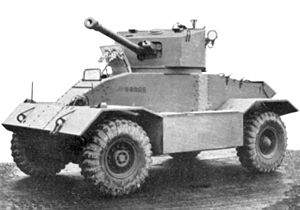