The ''Bowery Boys'' were a loosely organized American Criminal Street Gang, which operated in New York City of the 1830s thru 1880s (although much of their influence was broken in 1863). Named for being part of The ''Working Class'' of New Yorkers who lived and worked in Manhattan's ''Southern End'' or Bowery, they were nit as one who ''see'' a Street Gang. With numbers that peaked at 5,000 active duty Members at their height, The Bowery Boys were actually skilled Craftsmen. But their primary (original) vocation was born out of The City Volunteer Fire Companies – as Firemen. The City did not have an organized City ran Fire Service in the early to mid-19th Century. Much of it's Fire Fighting abilities came from ''Volunteer Companies''. The Bowery Boy began and in many cases maintain much of their ''power'' by ''allowing'' Rival buildings and Businesses to burn, rather than ''put out The Fire''. They became a powerful tool for the many corrupt City Politicians of The Era.

The Gang was also noted for it's dress/ Wearing ''Common Man's'' Dress clothing – often well worn and ''shabby'' (but well maintained), it was their Stovepipe Hat that identified they (normally Black). Red Shirts (a nod to their Fireman Past) was another piece as was their ''bullet cut'' hairstyles. The Boys were also ''fans'' of Theater (especially Play which portrayed them). Such ''Common'' or ''Street Theaters'' were frequented by the Lower Class for entertainment. The Boys political views were radical to say the least. Staunch Nativist's (''America for American Born'') placed them as being very much against the influx of immigrants from Europe and elsewhere (especially The Irish, whom they saw as ''blood enemies''). They were likewise anti-Catholic (although most did not attend any organized Church). They were also against ''Freemen'' (Blacks living and working in New York), as rivals for Labor Jobs (much as The Irish were). The Bowery Boys, despite their apparent ''Lawful activities'', were above all – thieves and murderers. They preyed on the more poorer Class of The Bowery for ''protection monies''.

The Gang's primary rivals (as stated), were The Irish (who too, would form their own Gangs). Most notable – was the infamous ''Dead Rabbits'' Gang. Constantly ''at War'' with them (and those Police not so corrupted), their ''conflict'' would reach it's apex in 1863, with the more infamous New York Draft Riots. They too, robbed, murdered and burn much of Lower Manhattan in a ''final battle'' with The Dead Rabbits. After several day6s of chaos and anarchy, The Union Army was called in to maintain order. After many hundreds of dead, the bulk of Bowery Boys ''power'' was broken. But the Gang would remain, forming (briefly) every year or so. By the 1880s however, much of Then Boys began to break up into smaller Gangs, thus losing their original identity and ''core beliefs''. 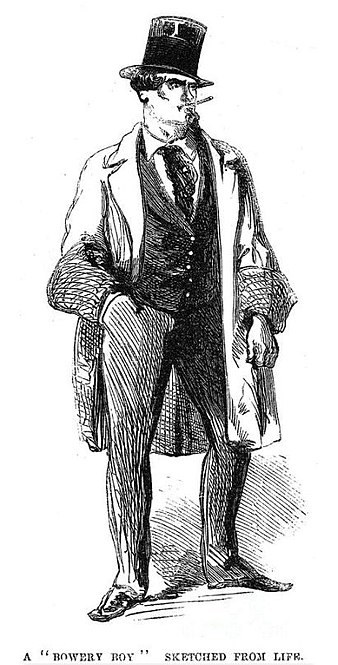