More appropriately translated to "Air Force Regulation 200-2", this was the official protocols for any USAF personnel to use in the proper investigation and possible collection of Alien evidence or dealing with actual contact with Alien Life . Written in 1954, AFR 200-2 (although revised), was THE standing Policy for over 20 years. It's existence was denied until the enactment of The US Public Information Act of 1974. Even then, when originally released - it was heavily redacted on the grounds of "National Security". It wad not until the late 1990s that actual "clean" copies surfaced. No doubt many were from now deceased USAF personnel who kept them as "unofficial" souvenirs. A $100,000 (USD) Fine and 5 years in Prison were also attached.

The Regulation outlined in great detail, HOW to investigate not only UFO reports front civilian contacts, but how to collect and secure possible Alien debris AND Aliens themselves! This applied to both "living and dead specimens". The Regulations specifically outlined a proper notification protocol as well. Of the most serious, and to some - proof positive of Government cover-up allegations, are The Regulations detailed procedures for "convincing civilians of WHAT they DIDN'T SEE! Great pains were to be taken to establish every conceivable explanation of what the evidence was "rationally". Meteors, military aircraft crashes, natural Earth atmospheric phenomenon - ALL were to be used. Further, ALL MEANS were to be employed to secure ANY form of "photographic proof" from reporting civilians EVEN Public Officials (Fire and Police).

The operative theory with AFR Regulation 200-2 is this. IF these things did not exist, why write the Regulation The USA is NOT noted for it's "sense of humor" - especially during The Cold War Era. The Regulations clearly spelled out the immediate need for "physical and functional evidence" - which COULD be "back engineered" for weapons advances. Although never SPECIFICALLY mentioned, certain "terms" and protocols harken back 7 years PRIOR to the so- called "Roswell Incident" (thus written in The Regulation as "The Incident". The USAF today (of course), state that 200-2 was a form of "propaganda" aimed at The Soviet Union (Russia). 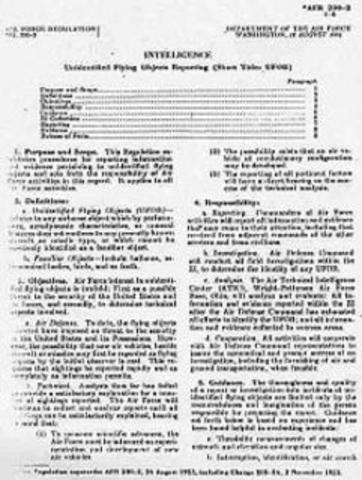