These amazing series of photographs were taken by an unidentified Mother who was outside of her home in Weyauwega, Wisconsin (US) on February 15, 2003. She refused to give her identification for fear of harassment (by who One wonders ). She did provide (in her official Report to a Civilian UFO Report Organization) the following story with her photos. The Mother claimed it was a cold morning (snow had fallen earlier), The sky was overcast with fog. She went for a walk with her children (and took her camera with her perhaps to take some Winter photos of her kids). As they were at play, the woman glanced up and saw a set of 3 lights banking in the cloud cover almost DIRECTLY over her!. As she watched, she began to make out a Saucer shape . Sje noted that the 3 lights were white and teardrop shaped, with a single red teardrop to the front right of the bottom of the Object . The Craft made no noise (so she dismissed it at an Airship). The Craft changed angle from time to time . She quickly snapped several photographs of the Object before it disappeared again into the cloud cover . Scared, she collected her children and went home. She provided the Reporting Agency with the photographs. These were examined very carefully. It was determined the photos were genuine and could not have been a Drone or Airship. What is it then? 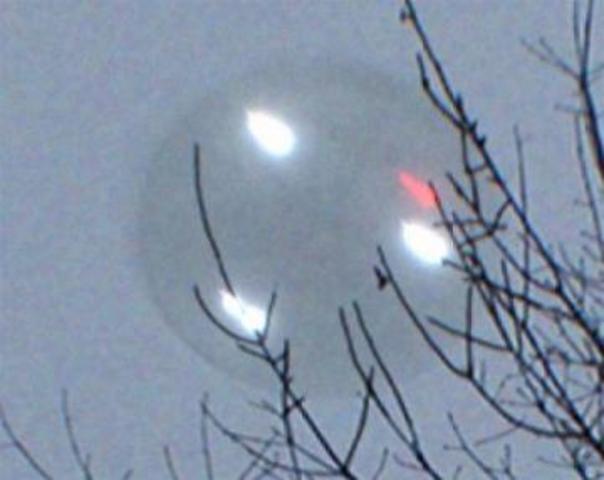