The Mars Automated Exploration Vehicle - aka "Curiosity", and nicknamed "The Rover", is a Robotic device currently in operation on The Planet Mars. It's primary goal is to gather data for future Manned Missions to "The Red Planet". It had sent amazing color and Black & White Photographs of the surface. One of which caused serious debate in 2015. On many occasions, "Rover" has sent Scientists "selfies" to allow them to see the exterior conditions of The Robot's housing (to observe mechanical issues. In 2015, a photo was released, which purportedly shows what can only be described as "someone - working or repairing" The Rover. This is an impossibility, whereas actual physical to Mars is still MANY years away. NASA (who accidently released the image) - stated that the "shadow" was nothing more than Rovers Robotic arm. However, closer examination of it reveals distinct differences with the contour of the "shadow". Could Rover have encountered a "curious" Alien Visitor The "Far Left" Conspiracy Theorists say it is proof positive of a "Human Hybrid Program". In a page taken from the popular "X-Files" Television Show, their theory States that Alien and Human DNA was "fused" to create a type of "Super Space Explorer". They allegedly operate in a secret Space Station and can perform effortlessly in the dangerous rigors of Space. Having explored MANY of our Solar System, they were responsible for "fixing" a near fatal mechanical error with Rover. Far fetched  - Perhaps. But then just what is the shadow in the photograph? 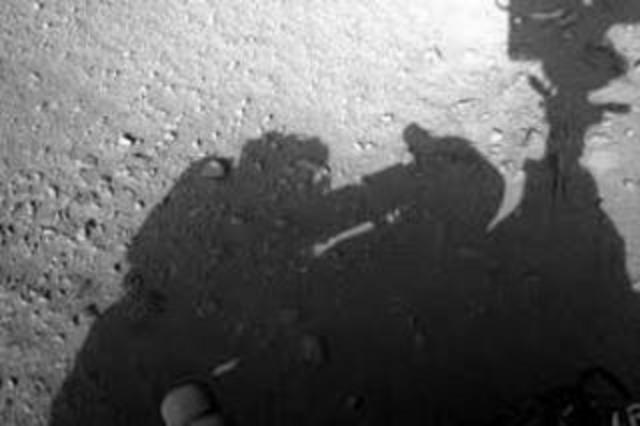