The Ordeal of Iron

As far back as the 14th Century AD – many European Countries used The ‘’Ordeal of Iron’’ as a means of establishing Guilt. The process, legally accepted – was used mostly against Women accused of Adultery (seldom Men). The procedure involved taking Ploughshare Blades, made of iron – and superheating them (with fire). Once ‘’glowing red’’, The Blades were laid don on the Earth, as a ‘’Path’’. The Accused was required to walk upon The Blades, barefoot – for ‘’three paces’’ (or three normal steps). Allowed to then step off the burning metal, the bottoms of the feet (now with possible 3rd Degree burns or better), were ‘’watched’’ for either blistering or festering. If immediately blistering – this was seen as a ‘’good sign’’ of innocence. If the injury did not fester, then ‘’God saw fit’’ to ‘’intervene’’ and ‘’heal’’ The Accused. IF the feet festered, The Accused was Guilty and ‘’other methods’’ of punishment were inflicted (death). In cases were Blades were used, those that did survive the ordeal, often never walked normal again (or later died from sepsis). In another variation ‘’on a theme’’, Ordeal By Iron was by a long iron bar – likewise superheated and often placed on a Church Altar. An Accused had to pick up the heated bar and carry it to another Altar on the opposite side of a Church. IF They did NOT drop the bar – They were innocent. The practice would continue up to the 16th Century AD. 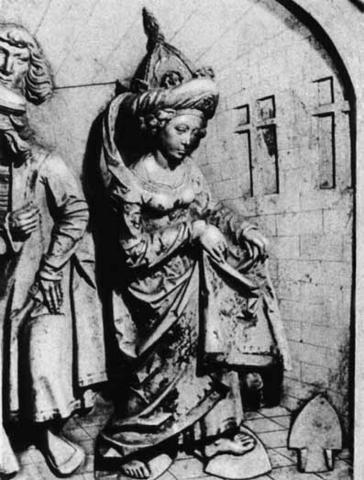