German Born George Adamski is often cited as an ''original'' UFO Hoaxer with his collection of 1952 B&W UFO encounter photographs. Adamski also claims direct contact by Alien ''Visitors'' on MANY occasions. It was Adamski who coined the oft use term ''Space Brothers'' when referring to his encounters. His so-called encounters led to many books (200,000 copies for his first two, Worldwide). Adamski lectured for most of His life, despite being dismissed and discredited by even the most jaded UFO Researchers.

Admaski emigrated to The US as a child (1893), He would join The US Army's 13th Cavalry (age 22) and would serve in The Pancho Villa Expedition along The Texas-Mexican Border (1912-1916). He later worked for The US Parks Administration and in various Factory jobs. Moving to California, He became interested in The Occult and Paranormal Studies, forming his own'' Organization'' devoted to this field of study. It was near Palomar, California (1946) at a campground that Adamski first ''saw'' Alien Craft. Detailed and Saucer (Pie-plate) Types, the shape was a commonly reported Class in the 1940s thru 1950s. A photographer as well, George took many photos of The Object he encounters at Palomar. In fact, The Objects decided to ''contact him'' one day hence the beginnings of his ''stories''.

The Beings were Humanoid and are best Classified as Nordics. Tall, they are fair skinned with human features. ''Piercing'' Blue eyes and long white ''feathery hair'' are their two most telling features. The Beings (impressed with Adamski's apparent understanding of The Paranormal), gave him great information on the Universe and Human History (past and Present). They even ''took'' George to one of their ''Colonies'' The Planet Mars. Adamski's photos (which he presented to The World in 1952), were poured over by Experts. It was determined that they were hoaxes. Adamski used Street Lamp Hoods and conventional light bulbs to create the fantastic ''Vessels''. Many have duplicated them with relative ease. With the vast majority of UFO Researchers have long ago discredited Adamski, his ''celebrity'' would go one quite strong, especially in Europe and among ''fringe'' science believers. He died in 1965, with his material (while not in current publication), can easily be found today. 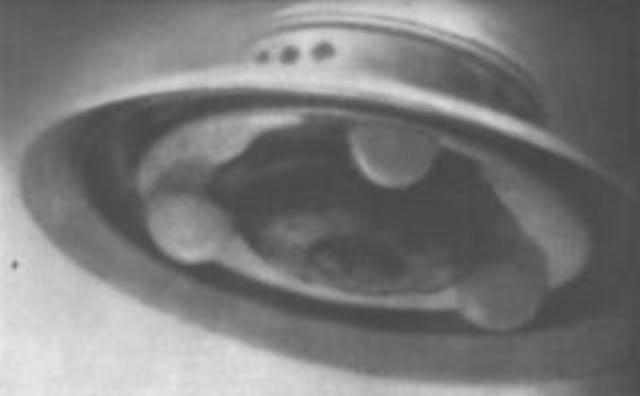