Reported on numerous times in Finland (by different witnesses) from 1973 to 1979, The Finland Mini-Saucer is an usual Case. The initial report was made by Jarmo Nykanen (an Electrician by vocation), He was vacationing for the Summer by a local Lake. Taking a nap, he was awoken by a strange buzzing noise . Thinking nothing of it, he fell back asleep. He was awoken yet again by someone knocking at his door. This was unusual, as no one else was around the remote Lake. He did not answer. The next morning, he went out to an Outdoor Sauna and saw a large crater (perfectly round and 6 feet across), in the ground. He called local Police who investigated (but found nothing). The next several days, he experienced strange noises throughout the night. Summoning up his courage, he went outside. The saw , what he claimed was a Circular Craft about 4 feet in diameter. It was hovering off in the woods roughly 500 feet from his back porch and 6 feet in the air. The humming seemed to be coming from the Object. Nykanen ran inside and grabbed his camera. After he took a series of 5 photographs the Object winked out . This same type of Craft was reported by at least 30 different people (from all walks of life), on and off until 1979. The Craft was seen in wooded areas, over roads, Lakes and Apartment buildings!. Nykanen was the only one to photograph The Mini-Saucer (let alone get close enough). Various sightings were reported to The Finnish Government. NO investigations were done. 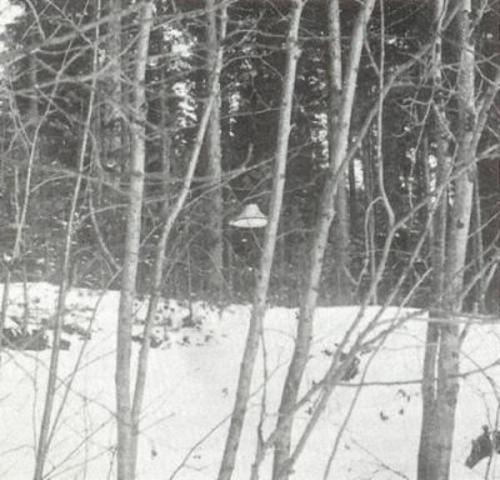