No one in the ''unnamed'' Family from Venezuela thought that their February, 2010 Outing to the Mountains and Forests of El Yeso Cajon del Maipo, would create so much fervor. The ''fuss'' propelled them into the ''limelight'' and added even more ''proof'' of Alien Life and Spacecraft visiting Our Planet. The Family was enjoying the beautiful location with it's green forests and particularly blue skies. Some high clouds could be seen. After taking many photographs, the Father saw an unusual clump of clouds, high in the air. Liking the view, and thinking nothing of it – He took a quick snap. The Family continued with their Outing and went back home.

When Dad began to review the pictures taken, He came across the photo of the cloud and saw something that He claims was not there before. ''Nestled'' between the high clouds, was a rather ''large, Saucer-like Object''. Either ''lights'' or perhaps ''windows'' can even be seen. The Object for all intents and purposes ''appears'' to be ''hiding'' from view. It was simply a matter of seconds that ''it'' appeared long ebough to be captured on film. Unclear of just what He had, but aware that it was ''unearthly'', the Father took the picture to a well known Private UFO Evidence Collection Bureau. The Object was scrutinized by many – using computer technology to ''tear away'' any possibility of possible fakery (photoshop). The picture and camera were both thoroughly examined. The end result, the picture was real, and if it was faked, Investigators could figure out ''how''. 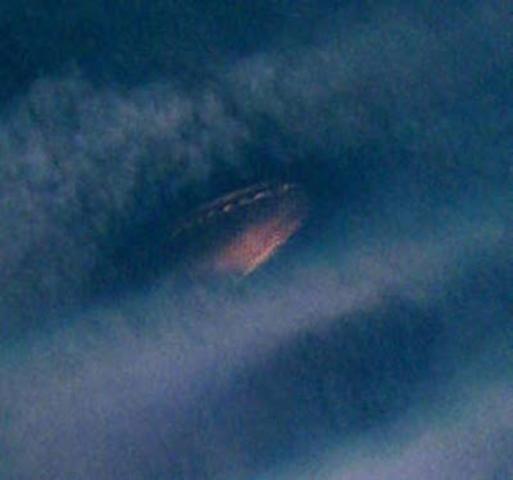