Perhaps an Ancient Incan religious relic, with ''attached'' mythical storylines, The so-called ''Door of The Gods'' is both unusual and rather perplexing from several points of view. Known locally as ''Hayu Marca'',  it is not too far from the iconic (and equally strange) ''Nazca Lines''. Local Indian Tribes tell of a amazing story of what The ''Door of The Gods'' and even more incredible just ''how'' it worked. Carved from a solid piece of stone, and only on one side The ''Door'' is a giant ''closed'' entrance. The Door featured a carved ''lock'' opening in it's front. Very little inscriptions or other imagery is found. The ''Door'' is also located in the ''middle of nowhere''. It was not part of a larger construct and it's existence is perplexing. According to local legend, The Door was used by Ancient Gods to traverse the great distance from ''their World, to Ours''. It was ''opened'' with the use of a ''Gold, hand-held Disc, which was inserted into the lock opening. Once done, the ''Door'' would ''open in a shower of Light and Thunder''. The ''Gods'' would simply ''walk through'' to get to their ''destination''. Once accomplished, The ''Door'' would seal.

To date, no ''key'' has been found (with only sketchy descriptions on ''where'' to look for one). Some felt that only certain ''trusted'' Incan Priests were given access to keeping The Key. Many theorize that The ''Door'' is actually a ''dimensional doorway a ''Stargate'' of sorts used by Ancient Aliens to arrive at the presumed ''worksite'' of The Nazca Lines. Perhaps, in some future time buried within some ancient Tomb, a ''Key'' will be discovered......... 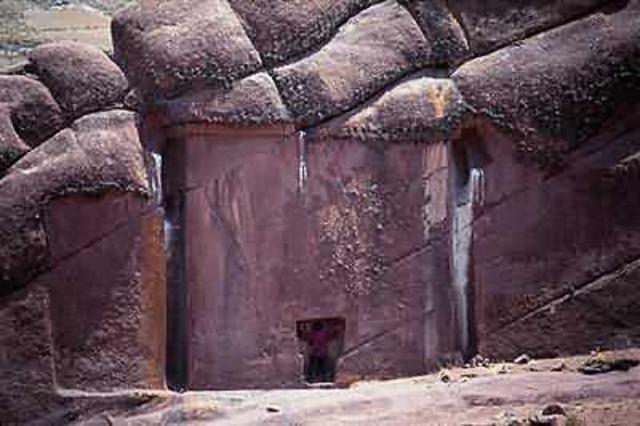