The phenomenon identified as ''Missing Time'' -   is part of many supposed ‘’Alien (Extraterrestrial) Abduction’’ encounters. Most of the phenomenon is related to ‘’modern’’ encounters, namely those reported by Abductee’s since the 1960s. Originally, the term was applied by Dr. Alan Hyneck – the (then) leading Authority on Unidentified Flying Objects and alien Contact. As the phenomenon is described, there are two variations. The First, deals with those People who come into ‘’direct contact’’ with purported ‘’Alien Crafts’’. The presence of ‘’Life’’ (Occupants), need not be ‘’seen’’. After prolonged ‘’exposure’’, people note that the ‘’time of contact’’ differs from the time of the Event’s conclusion. The ‘’elapsed time’’ could be several minutes to as long as several hours. No evidence of ‘’Contact’’ or being ‘’taken by’’ said ‘’Craft Occupants’’ is found (or later determined thru hypnosis). In the Second form, such encounters ‘’end’ with the Witness ACTUALLY being taken aboard such ‘’Craft’’. They are experimented upon (with tissue samples etc.), being ‘’extracted’’ by the Occupants. In other Cases, such ‘’Abducted Persons’’, are ‘’communicated with’’ – with often ‘’enlightened conversations’’ being the end result. These ‘’encounters’’ are often ‘’found’’ thru Hypnosis and the practice known as ‘’Regression’’.

Missing Time is reckoned by common timepieces such as watches. Abducted Persons seem to note the time ‘’lost’’ during the ‘’encounter’’. They state that these timepieces are NOT tampered with or otherwise manipulated. In many cases, when such devices are examined, no residual radiation or related ‘’explainable phenomenon’’ can be determined to be the cause of ‘’rational’’ malfunctions. Traditional Scientists and Doctors assign various ‘’mental disorders’’ brought about by perceived (or non) stress. The Devices such as watches or clocks are actually manipulated by a Witness, without Their knowledge. Less Traditional Scholars (UFOlogists), assign a more believable cause. Time, as reckoned by ‘’Human knowledge’’, is incorrect. Advanced Life would be far more advanced with regards to ‘’Linear Time’’, using variants for transportation and related functioning. Another variant used to describe the phenomenon is ‘’Inter-dimensional’’ travel and the aspects applied to that ‘’belief’’. 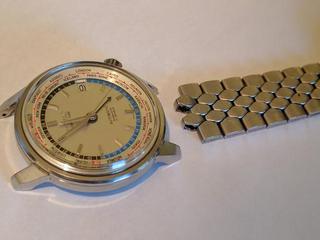