A 2015 Israeli made, ''Found Footage'' (kinda) – Horror Film, which is somewhat dragging but nonetheless entertaining, ''Jeruzalem'' is both a Zombie Pic AND a Demonic Possession piece. Using Zombies as more imagined in Ancient Judaic and Talmud Texts, the film centers around an American-Jewish Girl and Her 3 friends, on a trip to Israel (in particularly, The City of Jerusalem). We learn in the beginning of the film, that in 1972 a ''film' was made by two Priests of a Possession Case in The City, in which a Woman rose from The Dead, returned Home and ''became'' a kind of ''Zombie Demon''. Destroyed by other religious Clerics, The Film became an Internet Urban Legend. Our Heroine is given a pair of hyper-advanced ''Smart Glasses'' as a gift from Her Father, and We ''see'' the film from her eyes as it transpires.

The Group encounters strange evidence that Jerusalem is one of three spots which purportedly was built over one of the three ''Entrances to Hell'' (again according to Judaic Texts). Slowly, They encounter Demonic Zombies (complete with Bat Wings), slowly beginning to take over the unprepared City. The Government sees the ''Demons'' as some for of Terrorist attack and begin to cordon (seal off) Jerusalem, sending in Army Strike Squads to eliminate The Foe. But there are too many of Them. ''Infecting'' others by a mere ''scratch'', more and more of The Demon Zombies are produced until – (of course), even Our Heroine ''becomes'' one of The Creatures. We as an Audience are left with the image of a burning Jerusalem, with skies full of the ''flying Monsters'' while Israeli Forces helplessly try to flight Them off. The Movie is too similar to ''World War Z'' in this account, which featured a very similar scene (but with more traditional Zombie Baddies). ''Jeruzalem'' doesn't really offer anything too new to the Genre, but if your particularly bored, give it a View! 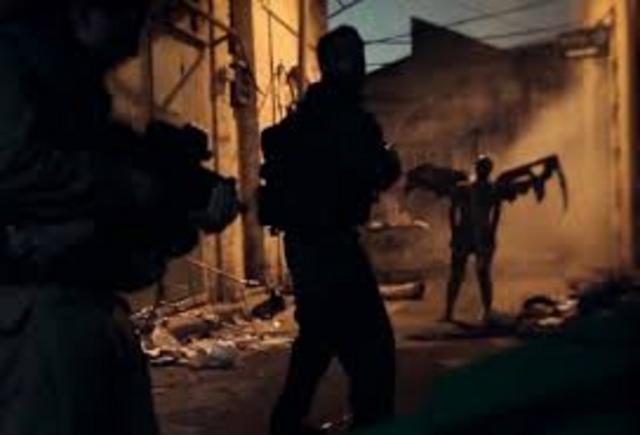