According to an Irish tale, a lad named Jack was a notorious drunkard and loaf-about. His favorite place was at the local Pub or Inn. On October 31st (All Hallow's Eve) -  Jack wasn't in Church, he was so drunk that his soul started to actually leave his body!. The Devil (long awaiting Jack to finally stumble), stood by to claim it. Jack (knowing he was caught) begged The Devil to let him have one last drink with him before they left. The Devil agreed, but said that Jack would have to pay. Jack said that he too was  broke but convinced The Devil to turn into money (to pay for the drinks) and then return back to his true form. The Devil agreed. As soon as this happened, Jack snatched up the money and put into into his purse (which had a cross-shaped latch). This trapped The Devil. Jack told ''Old Scratch'' that if he would leave him alone for 1 year, Jack would let him out. The Devil agreed. Now shown the error of his ways, Jack tried to reform. He was good to his wife and children, gave to the poor and most importantly stopped drinking. Unfortunately (being Irish), this was next to impossible. Jack soon slipped back to his old habits. A year later, (again on Hallow's Eve)  Jack was drunk. Again The Devil came and tried to collect his soul. Jack (ever the thinker), said he wanted to have a last apple from a nearby tree, but that it was too high to climb. Jack asked The Devil to climb the tree to fetch it before they departed for Hell. As soon as The Devil was in the tree, Jack carved the sign of The Cross on the bark (trapping a very upset Devil). This time The Devil told Jack that if he removed the cross, he would never be troubled by him again. Jack took the deal.

Jack's drinking took it's toll. He died and proceeded to Heaven. However, his life was poor and his soul judged not worthy. He was sent to Hell. There, The Devil took one look at Jack and said, ''I told you I would not harm you, so go away and back from whence you came''. Without heaven or hell, Jack was cursed to wander through the night. The Devil took pity on Jack and gave him a large hallowed out Turnip for a head a piece of lit coal so he could place it inside and use it as a lantern to light his way for all eternity. Wandering the countryside, children would run with fear (especially on All Hallow's Eve), when they saw Jack and his glowing head. Although every Country that observes the Halloween Tradition has a variation on this theme , by the time it came to America (1800s), it was somewhat incorporated by Washington Irving into his story of The Headless Horseman (pumpkins making more sense to Americans than Turnips!). Since then, the tradition of carving out the gourd and making scary faces on it's front (all together with a candle, for light - course), is a staple in American Halloween traditions. 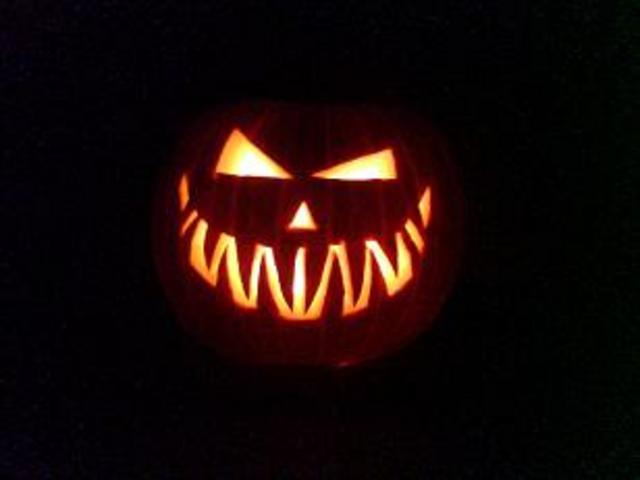