Traced to the 10th Century AD, the practice of Excommunication was a practice by which The Catholic Church imposed the ultimate sanction against a Member of that Faith. In simplest terms, it removed the Member from the ''Grace of God'' (spiritually) and ''protection of The Church'' (physically). All Sacraments installed upon said Member was removed through an elaborate Ceremony, usually conducted by an Archbishop or Cardinal. Whereas The Church was the dominate Christian Religion, Baptism and Confirmation into The Church was seen as a mandatory measure. Consequently, ''regular'' attendance at Mass and financial support was expected. Regular ordinances for ''conducting oneself as a Christian'' was regulated and enforced with various levels of ''enforcement. However, should a Person commit such a heinous Act against ''God's Law'' (as perceived by The Church Hierarchy), the highest level of punishment given was to remove one from The Churches ''salvation''. This practice developed into Excommunication.

By the 12th Century forward however, the practice of Excommunication would develop into a major leveler for ''Political Control'' exerted by The Church over Kings and Queens. The mere threat of it against a Monarch (who was perceived to rule under ''God's Authority''), as a means to regulate Church control over a Kingdom AND it's Ruler was enough. It was used to force Kingdoms into Church sanctioned ''Wars'' and needs for financial renumeration. In time, such practice was firmly renounced by most Rulers (of note, those who embraced Protestantism), unafraid of Catholic Christian ''punishment''. Still, for those who embraced The Church, Excommunication was a powerful tool. The full and ancient practice placed a Bishop or related and The Clergy of His Administration – in a formal Ceremony on Church grounds. So assembled, each Clergy carried a long, lit Candle (taken and lit from The Churches ''Baptismal Candle'' (from which all Members personal Candles were lit upon Baptism and or Confirmation. This Candle symbolized the ''spiritual link'' between The Member, God and The Church. After a ''reading'' of ''specific charges'' by The Bishop, a series of Prayers were invoked. These were designed to ''remove all Grace'' from The Offender. In short terms, one's ''Soul'' was cast out'' into ''anathama'' (or non-existent and without form). All representative Candles were then turned upside down and firmly extinguished on the floor.

Normally, only The Pope could ultimately ''pass'' or ''remove'' Excommunication, once imposed. In some cases, it was removed when imposed – should The Offender ''some to His or Her senses'', regarding the original cause of the transgression. The Act was particular popular in the 15th Century AD when Protestantism was at it's beginning (seen as a threat). Many Kings and Queens *formally Catholics'' were so ''punished'' for either supporting or becoming Protestants. This Act also included the refusal of any ''Last Rites'' (upon death – actual or impending) and the denial of ''Christian Burial'' by any Officiant upon declared Church property. In The Middle Ages, Excommunication was a very effective measure of control. While seldom used today, the practice of Excommunication is still an included religious ceremony within The Catholic Church. 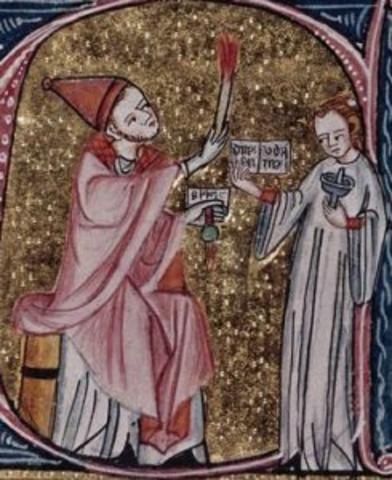