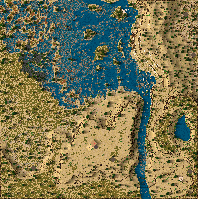 Three Lords stood in the war room, all were allies in the latest war, the land has been torn up, boundaries have changed, now that their enemies have left the land with their tail between their legs, new boundaries must be made.

Lord Wesly was the most powerful, Lord Ardinell lost the second most powerful castle only months before the war ended, Lord Alested was not to interested in power but liked to have powerful allies, so he was more inclined to go along with the other Lords, he knew what he wanted and was not afraid to ask for it.

" Lord Wesly I was the first to be destroyed by the ruthless enemy Sir Deitren, it was a hard day when we had to retreat to your castle, Sir Deitren has completely destroyed my castle, burned the woods, killed off all hunting all together, but in his need for total power he missed the area west of my old land, it still runs with deer, lots of wood, stone, iron even pitch, I would like to take to the Hillock and see if we can make a new go of it there."

" Lord Alested are you referring to the Hillock along the river, the Hillock overlooking the lake, I had my eye on that piece of land myself, but now with war over we have more than enough to do rebuilding our castle lands. No! I have no opposition to you taking your old lands back and building a new castle at the Hillock." " How do you feel about it Lord Ardinell ?"

" Lord Wesly, I have no reason to want any of that part of the Kingdom, I want to rebuild what we had before, Lord Alested you are welcome to build a new castle there if you want, but with such a rich land, I think it would only be fair if you could send us a tribute, as you said the land is rich in resources and we will all be needing goods before we can return our lands to their former glory, Sir Deitren ruined the farms and killed most of the game, we will need some food and stone blocks will be important to rebuilding, you say there is iron as well, then maybe you could make us some new swords and armor, just in case of any new threats."

" Lord Ardinell as always you are thinking ahead, I to think it would be reasonable to ask for a few goods in return, Lord Alested we have all suffered great losses during this war with Sir Deitren, but we still have some supplies, I think we could send you off with some supplies to get you started, we could spare a few bows and maybe some spears, there have been a few Arabian raiding parties seen in the area, but I don't see there being much of a problem, if you feel the terms are to your liking we could use a new castle on the Hillock to trade with."

" Lord Wesly Lord Ardinell I have no problem with sending you tribute, if it were not for you our lives would have been lost to Sir Deitren, as we lost our lands we kept falling back until we met with you here, the three of us sent him on his way. We will be ready to go in the next week, I would like to get started rebuilding right away, as soon as we get the goods packed we will start on our way."

As the week passed, what was left over from the retreat here was loaded into the carts, along with some wood, stone and a bit of food, the lords even threw in some gold with the bows and spears, when all was packed Lord Alested gave the word to move out. Lord Wesly and Ardinell stood side by side as they wished their friend the best of luck, they watched as the wagons slowly pulled out of the castle.

The first few days of travel took them past the ruin and destruction of the war, the land was ripped and burnt until there was nothing left but the foot prints of many warriors, but soon the land became green and fertile, they came upon the river that would lead them to their new home, with salvaged goods and old wagons and the peasants with their children and elderly slowed them down considerably. A week had passed and it still looked like 2 more were needed to reach the Hillock, but it was no matter, the fresh air and the sound of the river helped to ease the frayed nerves wound tight by the war, the hunters could get out and bring back fresh game, things were looking up.

When they finally reached the Hillock, every one was ready to start new, most walked out to the edge of the Hillock to look out over the shallow lake, to the right was what looked like an old road, now blocked with stone sliding down into the lake, off to the left they could see the rusty color of the iron patches and the marshes, this is when they first spotted the lions laying about in the fertile grasses, Lord Alested new he would have to get his archers out there before he could start building any thing along the western shore, but at the south of the Hillock was plenty of wood and room for farms, he would start gathering goods from the south while the lions were removed.

Lord Alested stood upon his Keep and looked over his new land, he liked what he saw he new they would do well here, he also new that before they could feel safe, defenses need to be set up, six bows would not be enough to hold off the Arabian raiding parties, his first priority would be to set up some fletchers then spearmakers, and when there was more gold coming in he would be able to buy some horse archers, and then they would be safe here on the Hillock. But wait that's it! the scribe was startled, " what's it Sire? "

" Why the name of course, we will call our new home " Alested Hillock " it has a fine ring to it doesn't it?"

" Sire it will be a fine name heard all over the land, known as one of the finest castles in the Kingdom "

" Let's not get carried away now, we have a lot of work to do before we can even call ourselves settled in. We have to get the woodcutters clearing wood in the south so we can grow some wheat and hops, the lions to the west will need tending before apples or iron can be considered, as the wood comes in we can build the castle buildings, the armory and barracks will need weapons, the Arabians will no doubt be sending raiding parties soon, and we will have to place plenty of water pots if we don't want to lose everything to fires, and the peasants will want to be able to relax at the inn."

" Well Sire I shall get your orders started, the peasants are happy about starting new, but they have already started to talk of lions and a shortage of food, I guess we can look into the stone after some of the more important crops are in and food is filling the granary, but for now wood is the main goal next to the lions."

Lord Alested got what he wanted, a new beginning on the Hillock, the war had cost him and his people almost everything, he realized as he looked out over his new territory that things would not be as easy as he let on, all that needed to be done would take time, resources and people, and the gold he was given was not near enough. But he had built his old Kingdom from scratch so this one would just be a new challenge.

Welcome my Lord, do you have what it takes to build Lord Alesteds Kingdom, I wish you luck!

Really nice scenario, it was a hard one to win, but it can be done. Landscape is greatly done, just as usual in lord Vetka's maps, and it's very creative. Also, it's quite a challenge!

I apologize for the late response.

This map was made a long time ago, I do like to make my maps look as natural as the editor will let you, the invasions are not to hard, but balance comes in with not being able to build to large of an army to defend with, the goals just use up the time you have.

Glad you enjoyed your stay!