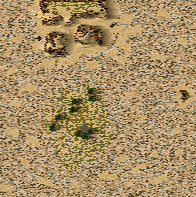 After the conquest of Jerusalem the Kingdom of Jerusalem was established. The borders of the kingdom was not very well defined, and so it was decided to build outposts in disputed territory. You, a french knight named Gilbert d'Arnault have been chosen to establish - for early warning purposes - an outpost by a small waterhole south of the city of Ascalon on the border of the Fatimid Caliphate. You have been given a few supplies and some gold and told not to expect any more help from the kingdom.

You have now arrived at your destination, and you will have to quickly build a fortified community able to withstand any fatimid skirmish party.

Note: This is a fairly short eco-invasion scenario (6 ½ game years). You will have to prove your economic skills, if you want to have a chance of survival.

This is an interesting scenario. I won the game from the first attempt, but only by stubbornly not giving up. I barely survived. I used the lord while defending, and at the end of the mission the lord was barely alive. :D But O will give it another try, as this time I was doing some stuff too clumsy. (I didn't notice the food was at half rations, and that taxes was at +4. Next time I would change those to zero, right from the beginning.)

One one for others who would play this scenario. There is no time limit until when you need to finish the castle. So you can defeat the invaders, and then enclose the castle. I personally prefer it this way, and I hope it was intended to be like this. This way I think how to survive these attacks – which I barely managed to do, and after I withstand everything, then I can finish my small fancy castle.

thanks for testing and playing the scenario. Your comments are "surprising" to me, as I didn't expect anyone to repel the enemy forces without at least 4 unbroken walls. I usually have 4 walls, 2 gates and at least 1 tower before the first enemies appear. But if you're able to fight off the enemy and then build your castle, you absolutely deserve the win! :-)