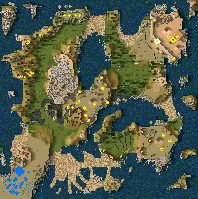 This is a remake of the Dietrich campaign of STR Legends.

Dietrich of Berne was so fat at birth that his mother, Queen Odile, nearly died during childbirth. It weighed as much as a bag of grain, with a head about the size of a watermelon, and a smile that was just as wide. We came from far away to contemplate this oversized child. When he reached adulthood, Dietrich peaked above most men and could swallow several boars with each meal. Thanks to the constant teaching of his mentor and master of arms, the wise and courageous Hildebrand, Dietrich became a formidable fighter, sometimes even a little too reckless. It is at a banquet in his honor after a glorious victory against the people of the mountains of the cunning Orkis that our story begins.

The unthinkable happened messire! Prince Dietrich was drugged and imprisoned by the servants of Sigenot. Dietrich has always been our first line of defense, and without it our lands are exposed to attacks by Orkis' clans of the mountains. Their presence is already reported in the neighboring villages! You must guide Hildebrand and a small troop to the place where Dietrich is held prisoner and try to free him. This done and Sigenot defeated we will expect reprisals from Sigenot's brother, Orkis. Considered by many to be giants, they are only men, but of gargantuan proportions. Let's see how a giant's head rolls.

A year has passed since the victory against Sigenot and we thought that Evil was defeated. Alas we were wrong .. Sometimes the most magnificent creations can be the most formidable, and the power of desire make everyone lose their wits. It was by knowing this that Laurin, the Dwarf, created a garden of roses in which extraordinary flowers diffused a perfume as delicate as it was enchanting. But the heart of Laurin was dark and only the sufferings of others rejoiced. Every man setting foot in this garden was thrown to the dogs while the women were captured and became the Dwarf's slave. Kunhild, Dietleib's sister, Hildebrand's cousin was also abducted. Dietrich offered to take care of Laurin himself. The misdeeds of the hateful King Dwarf will soon be over and these damn roses will only be legends.

Last night a warrior by the name of Siegfried appeared at our doors, they seem that one of the ladies snatched from the claws of Laurin was his fiancee, Princess Kriemhilde, and he wanted to thank Dietrich. I had the impression of seeing two bears face to face. Then the mead and the stories of battles flowed freely and the din of arms rang out between the two princes, alcohol being what it is .. Siegfried wished to converse with you this morning Lord, but feared nothing I I have both plunged them into the horse trough this morning.

I owe you other excuses my friend, See you I found myself last summer in an unfortunate situation. I met two brothers, Princes Schilbung and Nibelung, who quarreled over the treasure left to them by the last King of the Nibelungen. They offered me the great Balmung sword to resolve this dispute. But when I did, they said, quite unfairly, that I had kept some of the treasure for myself. They attacked me and I managed to escape thanks to Balmung . I had hoped to be safe here, but it seems that their army is preparing to walk on me. And that's why I need your help ..

5 The Throne of Orkis

The conquered felons Siegfried left for the quest that had brought him to our lands, hunting Fafnir, his uncle .. Our kingdom had gained a new ally. But Orkis' interference in our affairs goes beyond the limits my Lord! The actions of his brother Sigenot, the support given to Laurin and his recent annexation of one of the neutral counties urges us to act. Our country will not have peace until we find a way to prevent the clans from attacking our villages. Although many mountaineers fear Dietrich, and for good reasons, the prince also knows that he can not be everywhere at once. Also, with the wisdom that characterizes him, he decided to bring the fight directly to the threshold of Orkis. Dietrich took command of a troops to besiege the Orkis's fortress in the Alps.

While Dietrich was leading the fight against Orkis, rumors told us that Siegfried had found the object of his quest. Fafnir, his uncle, had betrayed and murdered Siegfried's father before fleeing at night with the treasure of the kingdom and his faithful mens. Siegfried had heard of a so-called dragon living in cave's swamps. The villagers trying to enter his lair had all been charred. Recognizing the Greek Fire tactics that only his uncle Fafnir knew in this kingdom, Siegfried hastened to gather his faithful to put an end to this legend and recover the treasure that came back to him by right.

The "Giant" had been defeated! Our lands were finally safe .. But for how long ?

Janibas, the offspring of Orkis, had long since gone out to explore obscure countries, having returned to the news of the death of his monstrous father. Janibas had acquired some dreadful occult knowledge during his journey and that did not bode well for Dietrich. While inspecting the ruins of the fortress, he swore not only to avenge the death of his father, but also to seize the throne of Dietrich's father, Dietmar of Bern. The Prince's forces being more powerful than ever, the task proved complicated. So the sorcerer sought to put his hands on the knowledge of the alchemists of Virginal, Queen of Tyrol. Dietrich, hearing it, hastened to run to the help of the Queen, who was said to be very attractive. Tyrol is weakly defended, the task will be difficult, fortunately the sorcerers of Virignal initiated us to the formidable "river of fire". The fire against the pestilential spells of Janibas ..

There is little that frightens those who are inclined to evil more than the prospect of death, because no one really knows what happens to those who have suffered in their lifetime - and Janibas has more than multiplied crimes. His general vanquished, the wizard returned quickly to his palace, he concentrated these last resources and occult knowledge to protect himself from the massacre that he knew inevitable. Whether the darkness or the light triumphs, the fight was announced harsh.

There seems to be more than one way to reach the wizard, but I'm willing to bet my boots that he has a delicate surprise, no matter what path we take. Dietrich and Hildebrand will have to win or perish. I do not want my son to grow up in a country where such an evil creature survives!

Janibas finally dead, the country found peace and serenity, and Dietrich could marry with Queen Virignal. Let him enjoy this well deserved happiness, other adventures await him soon ... Because the gods have not yet finished with him ... When Siegfried his story had a much less happy end. After a ridiculous argument he was murdered during a hunting party by two of these vassals with the complicity of Brunhild, his sister-in-law. Thus dies the heroes ..

We're sorry it took so long to approve this map and your others waiting approval. There has been a lot going on lately which has left me with very little time for the site.

The attention to detail you have put into these maps is phenomenal. Well done! Please keep more coming! :)

No worries :! :) Thank you for continuing to run this site that allows Stronghold fans to be creative and to share many and various stories !