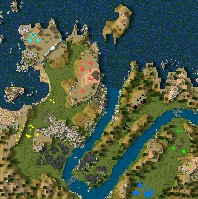 Addition of the optionnal mission of Gareth and the Red Knight

This is a remake of the Arthur campaign of STR Legends.

Incarnate the Arthur and defend your kingdom against saxons, build camelot and protect your crown from your half-sister Morgana and Mordred

In the year of grace 450 AD the darkness of the tribes fell on us. These had obtained the key of our territory and could not be stopped. The arrogant Tyran Vortiggern had invited them to share our loaves and protect our borders. But we were betrayed by those who we wanted to receive as brothers. They left our lands red with blood, only the arrival of Uther Pendragon awakened our will. But now he too has been overwhelmed by the Saxon wave, only a few brave people remain on this fragmented land, devoid of leader .. without a king ..

In the last skirmish a young captain saved Messire Bedivere from an ambush, which he left in a terrible state. After bringing him back to the old fort, he hastened to gather the rest of Uther's army and prepare the counter-attack which would cut off the head of the Saxon warlord.

This captain was named Arthur.

After vanquishing the Saxons, Arthur and Bedivere were joined by Merlin the druid who led them to the stone circle that was not far from the home of the defeated Saxon leader. After having take the strange sword that was planted in the heart of a rock, Merlin announced to the knight and soldiers present that was standing in front of them, Arthur, son long since disappeared from a ... imprudence between Uther Pendragon and Dame Igraine, wife of Gorlois, Duke of Cornwall. With Bedivere to teach him the uses of chivalry and combat tactics, he will make a great leader. But for now Arthur decided to build a castle near the river Cam. A wedding was arranged and Lancelot went to escort the bride, Guenievre. We must now finish the castle and the preparations for the wedding before the arrival of the beautiful lady, while taking care of the Saxon looters still roaming the region.

As soon as the queen arrived, Arthur became crazy about her and excited like a young foal. The beauty and sweetness of Guinevere also made her very appreciated at court. But one day when she was hunting, she was taken away by the servant of the repulsive Meleagant, son of Bademagu, king of Gorre. Lancelot du Lac, proposed to go and rescue her and left to face Meleagant in a duel. While he was about to deliver the final blow, Bademagu begged Lancelot to spare his son and promised to let him go with the Queen. But the injured pride of a son can lead him to betray his father .. Lancelot is now besieged in a fort or he has to find refuge with his troops. He must hold and repel the forces of Meleagant until the arrival of Arthur's reinforcements. Only then will he be able to enjoy a well-deserved rest in Camelot

The King sent his faithful knights to the countryside to gather informations that could help save the country. But this afternoon, a woman named Lynette arrived at Camelot and begged the king to rescue her sister, Dame Lyonesse, who is besieged by the Red Knight. Arthur had no one to send, and the situation seemed hopeless until a kitchen's boy named Gareth offered his services Lynette was not thrilled to be offered the help of a man who smelled cabbage, as attractive as it is, but no one else coming forward, she reluctantly agreed. Gareth, who was none other than Messire Gauvain's brother, had a lot to do. The Red Knight had left three of his most loyal lords to block Gareth, the Green knight, the Yellow knight, and the Black knight. Furthermore Lynette's mood was most dreadful. If Gareth succeeds in this master stroke, perhaps the King will accept him at the round table and finally leave these stinking kitchens.

A4 The Evil Witch

It is sometimes better to be wary of relatives like the plague. I think our King was very careless in inviting Mordred, the son of his half-sister, The Fairy Morgane, to join his knights. I warned her that she was power-hungry and would use her son to achieve his ends. A few nights ago, they were caught performing an evil ritual designed to wreak havoc on Camelot. The witch and her offspring fled to Valley-of-no-return, taking with her her lover, the knight Lamorak. Several days later, a gauntlet encrusted with blood was found at the north gate. Guinevere identified him as belonging to Lancelot. Upset she shut herself up in her apartments. No doubt this is a consequence of the shenanigans of Morgane. Our King left with these noble knights at Valley-of-no-return to save him.

From the wall Lamorak the renegade looked at Arthur and his knights, assuring them that no one would cross the door of his beloved's dungeon. Arthur would have to strengthen the defenses of the old fort in ruins in the plain and repel the dark servants of Morgane before slaying his old vassal and thus save Lancelot.

While Arthur's forces were investing the castle, Lamorak challenged him in dual.

Although very skilful, the fight was intense and finally Arthur fought the felon with Excalibur.

Lancelot was released from his cage, tears came to the King's eyes when he saw the pitiful state of his friend. Although there is no trace of Morgan and his offspring, was a great victory against evil and the return of the heroes was celebrated for days. When the queen came out of her torpor and the return of Lancelot returned her joy of yesteryear. But the peace was short lived. A few months later, an old enemy reappeared. An immense Saxon army landed on our coast. If Arthur and his knights were able to hold Camelot and defeat this army, the Saxon wave would be irreparably broken for a long time.

The Quest of the Holy Grail, this cup in which Jesus drank at his last meal and which was used by Jospeh of Artimathea to gather the blood of the savior on the cross, is not a task to be taken lightly. It is a quest for divinity. So when Messire Galahad, Percival, and Bors stepped forward to accept Arthur's new venture, they had no idea that this supreme quest was going to consume their existence. After suffering the worst storm ever known, here they are, with their troops, stranded on the beaches of Castle Carbonek, presumed place of the Grail. The knights have to move forward, gather their scattered troops and slay Carbonek's evil defenders before the arrival of Morgan's agents.

A7 The End of the Round Table

Snakes! Vil Snakes! Their sordid betrayal is discovered! I have never looked at a man as consumed with grief as our King today! This wretch of Guinevere and that miserable Lancelot, who seemed so loyal! He has dishonored chivalry! The king has dissolved the Round Table and condemned the Queen to perish at the stake, it is the least that deserves this witch!

But while the little wood ignited, Lancelot on his powerful horse crossed the crowd and tore the Queen from the flames. The knights encircled him, and this man's demonic face swung his sword, killing Gaheris and Gareth the brothers of Messire Gauvain. May it be that Morgan's curse has finally been fulfilled. Arthur has sworn revenge and plans to lay siege to Messire Gauvain, Joyeuse-Garde, Lancelot's castle in France.

Arthur cruelly missed us, sir. With most of his troops out of the country, the Crown fell into the hands of fairy Morgane and Mordred. Your soldiers are few and the loss of so many brave knights has greatly demoralized the troops. Me, Bedivere, can not allow the lives of my brothers-in-arms to have been sacrificed in vain, letting myself be crushed by this jading harpy and the insidious fruit of these entrails! My sword is at your service and I intend to use it to slice one by one all members of Mordred! Now on the way, and face these wretches in the plain of Salesbières.

The fighting was raging, and the final face to face would not be long. Arthur faced Mordred on the shores of Lake Avalon. The fight was intense and Excalibur fought the traitror. Alas while Mordred was biting the dust, Arthur collapsed too, mortally wounded. These noble surviving knights came to these sides and brought him back to Camelot, not without accomplishing his last wish, to return Excalibur to Lake Avalon. The Kingdom was safe and Arthur would become a legend for the next century.

This is an incredible replica of one of my all time favourite campaigns in Stronghold Legends.

Well done, this is amazing. :)

Thank you for your encouragement and all your positive notes!

This encourages me to continue ;)