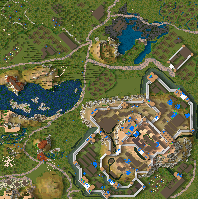 Picturesque ruins of a small castle on grubbing steep hill about 2km west of Herisau. Probably in the early 13th century. Founded plant belonged to a branch of the lords of Rorschach and was destroyed in 1403 together with the adjacent castle Rosenberg of the insurgent Appenzell. On display are the preserved remains of walls of a residential tower of Bering with door system and a larger building in the courtyard

Short background: All castles are located in a roughly drawn Fantasyland, which consists of the north east, south and west, and in the different conflicts are carried out during the 650 years. (1000 – 1650)

1272 is the castle, completely in debt, is pledged and thus passes into the hands of the Order o,ft he holy Way, an overpowering and aggressive religious kingdom in the North of Obertaurien. The religious leader / King used the castle as a summer residence and built many large churches. As an administrator he gave the task to Arko Watercock, you, the rat.

You are always playing one of the character, in this case you will be the rat. The dialogues would be otherwise complete senseless and irritating.

Events are always connected , can enduring for a long time. For example: rabbits, woof the oly Waylves, bandits, fire. You should be prepared for these disasters, otherwise you will loose.

Your general task is managing a castle till the end. It could be a time between 15 and 45 years. In economic missions the armies are small and less dangerous, but they can prevent you from reaching your goals. Some tactics, some people seems to be used to, will not work. The castles are often large, and it will be hard, to care for food. Respect the times, where nothing happens. The combination of events could be very devastating.

Sometimes you will fighting against yourself. This is simply the way of introducing events and desasters, which wil happen only in your country.

Religous Fanatics are composed of Monks, sometimes of spearmen, swordsmen and pikes too. It differs, because it depends on the number of followers.