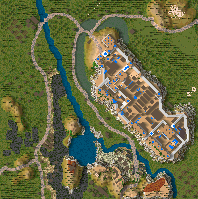 As before, the maps based on floorplans of castles and ruins, the castle of this map t you will find Castle Asseburg in Hessen, Germany

The way of scripting is meanwhile very developted. Therefore you will find here some necessary information.

You are always playing one of the charakters, in this case you will be the swine. The dialogues would be otherwise complete senseless and irritating.

Events are always connected , can enduring for a long time. For example: rabbits, wolves, bandits, fire. You should be prepared for these disasters, otherwise you will loose.

Sometimes an army of the swine is attacking you. But you are the swine??? ;-) Well, these are revolting peasants, religious fanatics, groups of plundering mercenaries, and so on. There are a quite range of possibilities.

If you fail in solving a oconomic mission, a large army will appear and attack you.

If you play a military mission, you will notice, that is nearly impossible for you to produce bows. I hate the easy way of producing simply hundreds of bowmen.

Your general task is managing a castle till the end. It could be a time between 15 and 45 years.In economic missions the invasionsarmies are small and less dangerous, but they can prevent you from reaching your goals. Some tactics, some people seems to be used to, will not work. The castles are often large, and it will ne hard, to care for food. Respect the times, where seemlingy nothing happens. The combination of events could be very devastating.

You are the swine, and you live in troubled times. You own a castle in the west of Taurien, an

D you a member of the Negre Knights,who are fighting against the free towns. But now, in these years, the members fight against another, fighting for leadership. Norgias tighter, a rising barbaric Kingdom in the Eeast, are plundering the countryside, and the Knights of the holy Way are attacking from the north. Could you survive? I don’t know, but you should try. And if you loose, well, 500 Years later tourists will look at the remains of your toilett, prising the fine art of the middle Ages. (1250 – 1286)

Religious Faanatics are composed of Monks, sometimes of Spearmen, Swordsmen and Pikes s too. It differs, because it depends on the number of followers.