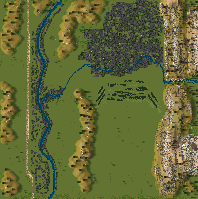 The Battle of Adrianople was fought on April 14, 1205. The combined Hungarian-Byzantine forces of Tsar Kaloyan of Bulgaria engaged the Crusader forces of Baldwin I. While enroute to Jerusalem, he entered the region to quash the rebelling Tsar. Marching North of the City of Adrianople, Baldwins forces encountered pitch and man-traps left by Kaloyan's forces. Unable to go forward, Baldwin's forces were flanked on the West and East by heavy infatry and cavalry. Before Baldwin could retreat, Bulgarian light cavalry - in a daring move, rode around the mountains and coming up on his rear, attacked. Baldwins forces were destroyed and he was captured and imprisoned.

NOTE: This is an unscripted battlefield map, done as close as possible to the actual field. The invasion points have been placed to show were the Bulgarian forces started their flank attacks. Pitch ditches and man traps are place in front of the marsh land, as was done on the actual field.

If your a good scripter, you may enjoy this map. Historical info. provided in-game. Also, The keep is hidden to give you opportunity to concentrate on tactics and troop placements.

Crusaser, by your post this map would make a good backdrop for a staged multiplayer battle (historical re-enactment so to say). Have you ever considered making a map like that?

Sorry for the late response Nigel. I forget to check this area. My scripting of Maps (believe it or not), needs work (in terms of proper triggers etc). I often just like to make historical battlefields and let other script the, as they feel. If you wish...(your time permitting), you can turn it into a multiplayer. I wouldn't mind. If not, I'll give it some thought with some other SH1 and SCH battlefeild ideas I've been toying around with.