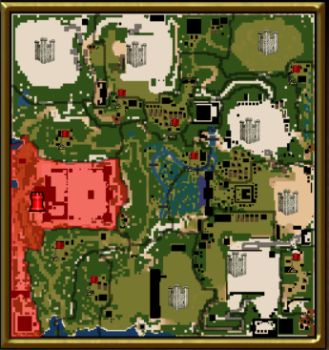 This map was very kindly allowed on our site by surfer78 of Stronghold Heaven. A big thanks to him for allowing it! :)

The king, an evil man, has commanded you to build his new castle and supervise the work on it. He and his family are evil tyrants who drive the citizens of this country into slavery. After all these years of suffering, the people yearn for a new righteous king who would liberate them from the slavery and bring back the peace to the country.

Are you brave enough ?

My goal was to make a huge map with a full scale war. In short words, to get out the absolute maximum of

You compete against seven opponents who will not let up until they have invaded your castle. At the start you are in the begin state of siege by the enemy.

You should buy some of your resources rather than to accumulate in the environment. In order to get money quickly, you need to produce goods and sell them.

Your castle is very big but not big enough to build everything into it. So you have to conquer the villages in your area, to obtain new land to make more room in your castle. Outsourcing of lower jobs, while at risk of losing your new land and the supply lines. You will need to build and protect your villages in order to start a successful siege of the enemy.

You are surrounded by dense forests. Sometimes you have to clear the forest so that you can use a village properly. This costs time and patience in which you have to keep the enemy at bay until your villages are ready to work properly.

But note that some forests on both sides can provide tactical advantages, good or bad. Either as a protective wall against your enemies and wild animals. Or you cut off everything and your enemies reach strategic positions easier, because no natural hindrance blocking the way. You have to choose and monitor the work from time to time.

You need a lot of troops, tactical skill and time in order to force the enemy to its knees. Minimum playing time is about 48 - 72 hours or more, depending on the tactical skills of the player.

This map has static enemy positions, because they are tailored to the landscape. So that means you can not choose the positions everybody has to start from.

In order to provide maximum comfort to the player, I created a save game which already has the correct settings. You start at the very beginning as a free man, with tactical points of view you can choose from, by pressing ALT and 1-9. A screenshot where to place enemies manual, in case you want to start with a different difficulty level, is also included.

Since this is a very, very large map, with a maximum number of buildings and units, unfortunately there is a problem with loading saved games after some huge battles.

If you exit the game (go back to desktop) and then again start off SH 2 and loading a (Valley of Mines) saved game, you could crash to the desktop after a while. This might happen when the map is full of activity. The probable cause is some problem with the temporary cache, which gets emptied by exiting the game.

To fix this you have to use an unusual trick :

Load a saved game and press pause when the game continues. Then you have to go into the bird's eye view and zoom out to the max. Then you have to scan the entire playing surface, like a scanner, so that the memory is filled with current information. Then you have to move the camera to a place where little or better no activity takes place. Set the game speed to 10, zoom totally in and let the game run about 1 minute, without moving the camera or building something.

Then the game has stabilized and you can continue playing normally. Build, move the camera, set game speed like you want and so on.

Furthermore, I have enclosed two bug fixes Firefly missed to repair. I used SH2 AI Editor to solve it.

Normally a tower is missing in the Queen's castle. In the packet is a revised version of Queen01.aic and the tower is now being built.

A further bug at Barclays castle, while the gates are not set when you start as a free man. A revised version of Barclay03.aic is included. The gates are now set.

The two bug fixes are not absolutely necessary but they fix very annoying bugs in the original Firefly AI scripts. Otherwise the castles are not closed properly and you can simply go into.