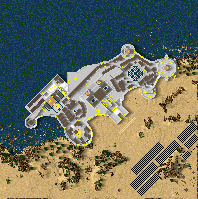 Author's Notes: I created this map sometime in August of 2013. I avoided uploading it for quite some time. I figured that I might as well upload this, since playtesting was already completed some time ago. So I threw together a small scripture in the map instructions. There's not much to say about this map. The main reason as to why I didn't upload it was because it was a fairly poor map to begin with. I wanted to create an alternative objective; where if you fail to destroy the cathedral and all of the opposing units in time, you would be still be required to remove the enemy forces, but additionally be required to keep the cathedral standing lest you should face defeat. This in turn would allow you to take control of the castle, but would force you to face thousands of Arabian soldiers.

It worked until the cede, in which I found that I would have to create a new keep afterward, which also resulted in a "siege"-like map, where no new peasants would appear. Instead of fixing it, I decided to leave it alone, because frankly, this isn't one of my better maps (seriously, "Sancta Portum Arenam", how lazy of a name could you get?). So here's a fairly simple map where the goal is to defeat the opponent and their cathedral.