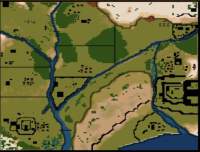 The map is not too hard but also not too easy. I recommend you have a decent amount of knowledge of Stronghold 2 before playing this map.

• Wood cutters are a must before anything

• Food is easy to get if you start production early

• This map has many invasions. Making a defence early is a good idea

• Use estates to your advantage. Placing buildings there instead of your territory is a good way to save land

• Be aware of your opponents

Translation- “You can fight forever if you believe in what you fight for...”

You are the unknown son of a well-known Welsh king, Llywelyn Fawr (Llywelyn the Great). You were born 1199, when your father was age 26. Your family

was murdered not soon after you were born, along with the rest of your family. Your father looked after you until you were 3. But things were changing.

A great war had broken out over many lands after Lord Barclay had killed your allies on neutral lands. Many other lords noticed the power

of Lord Barclay and decided to create alliances with him. Your father could not risk to lose his only son. He sent you away with a close friend, Sir William,

to the lands in Caerphilly where he thought you would be safe. For years Sir William had brought you up, until finally you were of age to rule your own kingdom.

You moved to a territory not far away from Sir William and began to build your kingdom.

All was peaceful for a while, until you had news that your father had been captured by Lord Barclay and his allies. Sir William and the new king of

Gwynedd had agreed to help you rescue your father.

But before long Lord Barclay and two of his allies, Sir Edwin and The Bull had started building a new economy and castle in neutral

territories and they were going to take you down for good.

Sir William now helplessly defended by his few troops is trapped. You are safe, for now that is. It is time for you to take control of your lands,

regain stolen lands, rescue Sir William and then take out Lord Barclay and his allies for good.

It is time for your revenge…