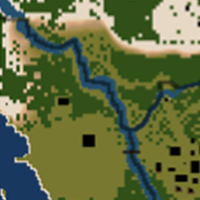 You had just moved into your new estate and settled in when you received a message from the King. It seems that his three children and their nanny, Goldilocks, have been kidnapped and are being held hostage by the Three Bears. They're demanding a ransom to pay for damage caused when the royal offspring invaded and trashed their house.

"I care not to negotiate with terrorists." His Highness declares. "As you are the Noble responsible for this area, I charge you with the task of securing their safe release and delivering justice to those conniving Bears."

Although this is a great opportunity to score some points with the Monarchy, it couldn't have come at a worse time. It's the start of the knighting season and you've already scheduled several banquets to get the honour needed for that promotion you've been seeking. What's more, you're in the middle of a massive reconstruction project. The whole area was hit hard by the earthquake last year. A new signal tower is going up right outside the castle and a bridge is under repair just down the road. Almost the entire village had collapsed and burned, although you where able to save some cattle. With very little food available, the peasants are in a surly mood. You simply cannot tear yourself away at a time like this.

Since you can't go rescue the royal brats . . . err darlings, yourself, you've acquired the services of the best bear hunter in the country, a chap named Angus Hashimoto. Part Highlander, part Samurai, he's known throughout the land as the Kamikaze in Kilts. He'll get the job done.

Meanwhile, you have parties to plan . . .

Note - This scenario immerses you in a challenging task of time and resource management, and also contains a surprise or two. Length is two missions covering 8 game/years, and plays approx. 30 minutes, depending on speed setting. Difficulty rating is Easy.

This package also contains a mission briefing, a hints file, installation instructions, a screenshot of the minimap, and the story of how Goldilocks got herself into this mess.

This file was made by PWRmad of Stronghold 2 Heaven, and he deserves full credit. A special thanks to him for allowing it on the site! :)