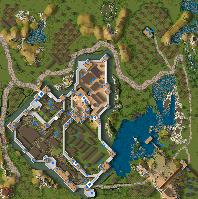 Although it exists and the map based on it, the map is not a model of Kamegg. Furthermore the map isn’t anymore very similar. The castle was for years part of my campaign, was destroyed, burned down and build up again and again by generations of Lords, which changed always the buildings. So the castle is now an organic grown structure, not a geometric, mathematical drawn structure as you will find it often on maps of this site. In this way it simulates the history of real castles. The fictional history ended 1650, similar to real events of the history, At this time only few castles became fortresses or palaces, the other were given up and crumbled.

The castle is mentioned with Heinrich de Chambecha already in 1150 for the first time in a document . The first governors were a ministerial gender of the Babenberger and probably belonged to the family of Kaja. Till 1312 their members are mentioned over and over again.

In the 13th century a clear extension of the castle took place In the 15th century Kamegg was in the possession of the Eytzinger. From 1534 to 1620 Lords of Puchheim put the governors of the castle. In 1620 the rule with that of the Rosenburg was combined. At that this point the small military construction had long ago no more military importance .

Because it also did not correspond to the risen demands in comfort any more and also had no court function, the castle was soon left and went to ruin.

You are Ansgar Tischbein , military leader of riotous farmers. You love your peace, but the new owners of Kamegg have turned out tyrannical and suppressing. After famines you raise not only yourself, but hundreds follow you. However, Kamegg is strongly fastened and the Lords powerful. But they are rich, very rich. Hence, you try everything that the castle and the gold becomes yours. Whatever it costs.

The castle ist strong and heavy fortified on level 8, so attacking will be not easy. You get help and some bowmen more, ut there are nasty events too. Look and care for the arriving, otherwise they will not survive. As revolting peasant, you start in a fortified settlement (;-) – hopefully –You should play that siege only as an attacker. The A.I is poor and doing things you wouldn’t have imagined.