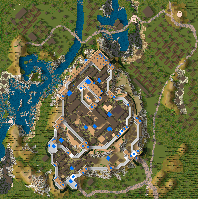 This is the first one of a row of pure siege maps. The castles are strongly fastened and often only difficult to conquer. I recommend to take over the role of the attacker, because the A.I works miserable and make unbelievable mistakes, if it attacks big enclosures . Although the map bases on the floorplans of castle Rodenstein, it is only partially a model of this castle. Some parts are free designs.

Where you could find Castle Rodenstein:

The ruin lies in a side valley of the Gersprenz valley off bigger settlements about 3.5 km west-southwest from Frnkisch-Crumbach in the Odenwald. The situation as a slope castle is to be looked rather than an unfavorable area . Beside the name the situation also points to a castle which was pushed forward in the cleared wood(forest). Here typically for such clearing castles the court(yard) is below the castle to which few fields and meadows were available in the valley as a usable area.

The castle is a military arrangement of the Lords ofCrumbach and Rodenstein whose headquarters was in Frnkisch-Crumbach. It was built about 1240 as a castle against the castle Reichenberg, and the Lords of Crumbach and Rodenstein got the full support of the counts by Katzenelnbogen. 1346 sold Erkenger, Lord of Rodenstein, half of his interest in the house Rodenstein to count Wilhelm II of Katzenelnbogen. In 1479 their possessions fell with the extinction of the Katzenelnbogener under Heinrich III to the county Hessen. The castle did not become by warlike events the ruin. After in 1635 Adam von Rodenstein with his whole family died of the plague, the castle was not inhabited any more. Since this time it was begun to break off parts of the castle and to reuse the building material. In 1640 and 1646 when the last Rodensteiner Georg Friedrich started a trip to France, it) was still intact. Between Georg Friedrich and his premouth a lawsuit in whose course turned of the Rodensteiner even to emperor Leopold developed from the begun demolition. Attempts to the restoration afterwards remained fruitless. After the death of Georg Friedrich in 1671 and the extinction of the Rodensteiner in the man's trunk the castle was used up to the middle of the 19th century as a stone quarry.

Rodenstein was built as a countercastle, as the castle which should disturb and hinder the Reichensteiner in every way. and hinder. Cornelius von Hardenberg, captain on Reichenstein, wants to see the hostile castle finally in remains and gives you the order to destroy this castle finally. you have free hand, but a defeat costs you your head.

As mentioned, this map is a pure siege map. The castle on the map is a castle of the level 6, good fastens and not easy to conquer . The choice of the army size remains leave to you. However,study the enclosure exactly.