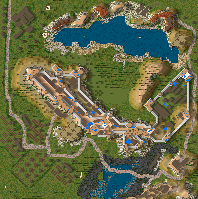 Although it really exists and the map based on it, the map is not a model of Falkenstein. The construction is in parts complete fictional.

The castle Falkenstein is a castle from the 12th century near the municipality of Philippsbourg, Canton Bitche, Dpartement Moselle. Since it was destroyed in the 17th century, it is a ruin. It is a mountain fortress on a 120-metre-long, about 22 metre high and from three to eight metre wide sandstone rock at 386-metre height.

The castle was established in 1127 by count Peter von Ltzelburg as a protection against penetrating the Staufer to the west. The Ltzelburger became extinct in the course of the century, and a hereditary quarrel resulted between the count Montbliard and the count of Saarwerden. Emperor Friedrich Barbarossa intervened in 1143 in the quarrel and gave the castle to count Volmar von Saarwerden. The ministerial of the castle wore in 1205 his office to fief of the counts of Saarwerden. That year the first known Falkensteiner, Jacob von Falkenstein, was also mentioned .In 1377 the castle was besieged by the Counts of Lichtenstein. Count Fntrange-Brakenkopf got in 1414 the saarwerdischen interest . 60 years later, so in 1474, Wilhelm von Falkenstein inherited the castle and inhabited.

The castle went over in 1515 in the sole possession of the Falkensteiner. They sold in February, 1564 their last rights for count Philipp IV von Hanau-Lichtenberg who attached the castle after that of the jurisdiction of the castle Lvov. As a result of a 5-day fire, causes by a bolt of lightning on the 19th of April, 1564, the castle was damaged. Only scantily repaired it served since then only as a forestry office of the Lichtenberger.

In the course of the Thirty Years' War it was looted in 1623 by Mansfeldische troops, was damaged and finally destroyed from 1676 to 1680 by French troops.

You are the snake and the viscount on Falkenstein, a forestry commission of your prince in Lorraine. It is a bloody war of thirty years , and the Mansfelder troops move killing and marauding through the conquered Lorraine. Also you became an aim to the murder distiller, but your castle is wretched. If you manage not to resist, if you are not prepared, you will experience the hell.

Honesty and cowardice were unknown to him .

The military call Mansfeld's was based on the fright which he spread, as well as on his organizational talent.

For the affected persons, and this was as a rule the peasants, towns and castles, meant the crude and person-despising way of the leading of the war as a rule the end of their existence. The officers fighting under his command and soldiers, even for past the scum of the mankind , seldom got pay. They paid themselves by pitiless and uncontrolled looting of the vanquished areas or occupied regions. A winged phrase was the saying "Where Mansfield occurs, nothing but remains broken stones and glowing iron back".

The castle is relatively weak, is poorly fortified and possesses only few advantages, because it is a castle on the level 2. Hence, you must use the remaining time so far as possible to discover the weaknesses and to fasten further. Do not look after the precastle, it will be easily overrun. For the rest, only 20 years remain to you.

Uploaded Castles are meanwhile ruins , but they were parts of a living campaign. What means:

It exists a roughly written Background Story, reaching over 600 years. Every map represents the rulership of a Lord, which can be between 20 and 50 years. This time can be very peaceful, but full of fighting too, and it could happen, that a Castle becomes destroyed and will be after a time rebuild .... or stays as a ruin. After every rulership, a catles gets more resources and more fortifications. there exists 24 fortifications, mostly own developments. A Castle starts with nearly no fortifications, only few ressources and possibilities, and there will be no signs of great culture work. Castles of the beginning are easily to conquer and hard to defend, Castles of the higher Levels nearly impossible to attack, you need all your wit and stratetic power to win. There exists 10 Levels.

During the time, peaple became able to build high Towers and impressive buildings or Palaces with lots of Windows, fill up swamps, errect Towers and buildings in lakes and the ocean, delete rocks, built platforms, flattened hills, build eye- candies, and so on. And than there are sometimes natural disasters ..

It can happen, that a map of a Castle has fully changed, when a new rulership begins. One reason, why I don't use too many eye candies. They are often based on bugs, and you can`t delete them, for example wooden ways and bridges. And it is too much work, to develop too detailed maps, if it is quite clear, that they will be completely destroyed.

;-)) No, I don't sit every day at the Laptop, constructing Castles ......but I am in the "Business" since 10 years ..... and the way of the Castles and of the Details changed strongly. My first maps wasn`t much better than the first maps, which you could find on heavengames, for example ....