Designed by Confederate supporters in Baltimore, Maryland (US), The Steam Gun was a portable cannon capable of firing up to 300 rounds per minute. 100-round cylindrical drums were designed to be slipped into the portable steam powered engine (attached). The firing was accomplished. through forced steam pressure to load and fire. Each drum had self-primed percussion caps. The City of Baltimore “supported” The early Confederate States (even though Maryland was mostly pro-Union). A Regiment of New York Militia was reported to be enroute to the City to “subdue” Southern supporters.The Steam Gun was to be used against these advancing troops. Never used and captured, The Steam Gun eventually made it back to Massachusetts. It was known to still exist in the 1880s – when it vanished. 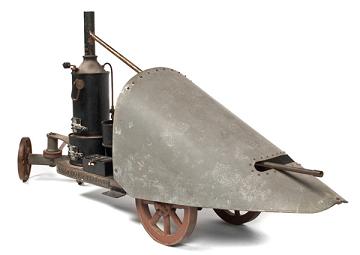