Nicknamed “Bucky” O'Neill, he served a Sheriff of Yavapai County, Arizona. He also served as a Judge (even without ever being a Lawyer). During The Civil War (1861-1865), O'Neill served as a Captain in the famed Irish Brigade. He was severely wounded at The Battle of Fredricksburg (1862). After the War, he returned to Arizona and lived for a period in Tombstone (meeting The Earp Brothers) and assisting them in arresting cattle rustlers operating in the area. He eventually moved to Prescott, Arizona and worked as a Newspaper man. Elected again as a Sheriff, he and a Posse were instrumental in breaking a local train robbery gang operating in the Region. At the start of The Spanish-American War, O'Neill resigned his position as Sheriff and joined Colonel Theodore Roosevelt's “Rough Riders” (United States Volunteer Cavalry). He served with honor and was killed at The Battle of Kettle Hill (Cuba). 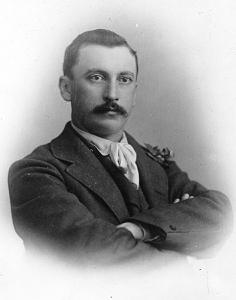