The earliest of the defensive Tower Systems built by The Military Order of The Knights of St. John (Malta), The Wignacourt Towers were designed by Order Grand Master Alof de Wignacourt around 1610. With early siege and conquest of The Islands of Malta and Gozo, the immediate need for both effective (and cheap) Fortifications and Watchtowers was telling. Wignacourt set about with the construction of his Towers. Made from Limestone and regional Shale, The (6) Towers, while their state use was as Watch Posts, they also served as early Artillery deployment platforms. As such they featured either a reinforced, enclosed stone roof (for gun support) or – much as with a Castle or Fort, reinforced Gun Emplacements were built into the Tower interior walls. Most of The Wignacourt Towers that were designed as Fortifications, featured (4) walls roughly 8 to 15-feet in thickness. Tower Battlements used the Middle Eastern Merlon for Top level perimeter protection. Enclosed Towers were simply best described as “completely enclosed stone rectangles”. Observations Ports were cut into the walls, with all facing Seaward. An average “Garrison” was around 25 to 50 Soldiers. However, although most of The Wignacourt Towers were very active at the beginning of The Maltese Knights initial defense of The Islands, most “Garrisons” would be recalled to the larger Castles and Fortifications for self-defense (leaving only a “skeleton” crew at any given Tower). Most of the Towers that survived out of the 16th Century, were renovated by other Nation’s Armies over the Centuries. Great Britain by way of example, garrisoned two of the most famous Wignacourt Towers (St. Mary’s and Saint Agatha’s) as Forward Artillery Observation Posts well after World War II. Today those survivors are excellent Museums which show the live experienced by a typical Maltese Knight of the 16th Century. 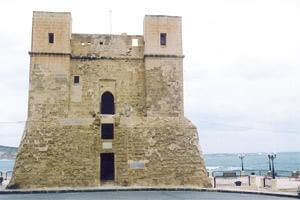