With obscure origins, The Cross of Neith is a Welsh symbol that can be traced back to the 9th Century AD. A Gold Cross, this device is encircled by a Gold enclosed Circle. Some links are also placed with the more ancient Celtic Cross (a similar symbol).

Legend placed a Cross and Circle device being brought back from a Pilgrimage to Rome by Welsh King Gywel Dda. The device quickly became associated with Welsh Royalty. In the 12th Century AD, a Banner was created using The Neith Cross and carried during many of Wales attempts to removed themselves from British Rule.

This War Banner was shown as having a full Purple Field. Centered and expanding to all points of The Banner was a Yellow (Gold) Neith Cross. 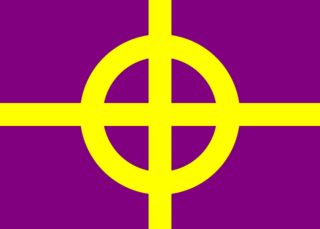