War Flag of Frederick The Great

Frederick The Great ruled over Prussia from 1740 until 1786. He was responsible for reorganizing The Prussian Army into a formidable fighting force. He was victorious in the bitter and bloody Seven Years War. His Royal Standard was based (in part) on The Holy Roman Imperial Banner. The Flag incorporated the black Maltese Cross flanked in all 4 corners with white borders. Gold Imperial Crests of The Hohenzollern House of Royalty. A black Imperial Eagle with Frederick's Crest was affixed to the center. The flag was carried by all of Frederick's Armies. The War Banner would continue (unofficially) until 1861. 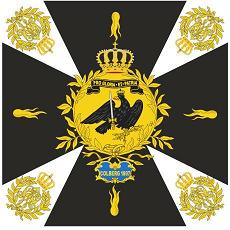